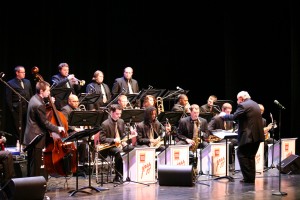 The Greater St. Louis Jazz Festival at the University of Missouri–St. Louis annually attracts today’s top jazz artists for a weekend of music. But it also sets the stage to showcase the next generation of talented musicians, the UMSL Jazz Ensemble.

The university’s student group, led by Jim Widner, director of jazz studies at UMSL, opened both nights of the festival this weekend, warming the audience for headliners Gordon Goodwin’s Big Phat Band and Conrad Herwig’s Latin Side All-Star Band.

“I never thought I’d be playing alongside big names like Conrad Herwig or Gordon Goodwin,” said Justin Young, a sophomore music major and pianist in the UMSL Jazz Ensemble. “That’s a pretty awesome experience. It gets you motivated to want to better yourself as a jazz musician.”

Young also was among 750 students from 44 music groups at 32 schools to participate in clinics and performances that took place during the day of the festival, held annually at the Blanche M. Touhill Performing Arts Center at UMSL. He learned directly from Conrad Herwig and other jazz artists.

But he said the biggest highlight was probably hanging out backstage with professional musicians from both headlining bands who were quick to offer their advice. Young said Goodwin told him an anecdote about one musician who was constantly playing, even during breaks by fellow musicians. The lesson? Whenever there’s a free moment, don’t be afraid to practice and experiment with new styles, Young recalled.

“It’s like the MasterCard commercial, it’s priceless to get to rub elbows with the people making a career out of being a jazz musician,” said Widner, director of jazz studies at UMSL and festival organizer. “For a young performer, it’s gold. You don’t get that opportunity everyday.”

After seven years, the Greater St. Louis Jazz Festival at UMSL has now brought together jazz artists with thousands of middle school, high school and university students from throughout the Midwest, and hosted performances by more than 50 jazz greats, including Clark Terry, Marilyn Maye, Buddy DeFranco and John Pizzarelli.

The Greater St. Louis Jazz Festival might be over, but the jazz education will continue at UMSL. The Jazz Education Network chose UMSL as the site for its inaugural JEN Conference May 21 through 23. UMSL’s Jim Widner, who serves as chair of the conference, calls it a three-day jazz festival with a strong education component. Visit http://www.jazzednet.org to learn more about the conference.