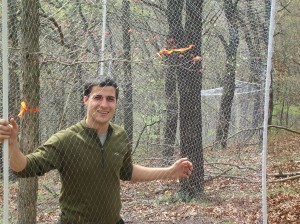 Biologist and UMSL alumnus Nick Barber stands in a bird "exclosure." He used the netting tool in a recent study.

A University of Missouri–St. Louis alumnus proved that bird, bats and lizards help ­plants grow and thrive. Nick Barber, who earned a doctorate in biology in 2009, was the co-author of a paper recently published in the prestigious journal Proceedings of the National Academy of Sciences. The paper proved that not only do birds and friends eat a ton of insects, but doing so actually helps plants – something that was not previously thought. Together, by eating herbivores and their insect predators, the three reduce damage to plants by 40 percent, which results in a 14 percent increase in plant biomass.

A copy of the paper can be downloaded at http://tiny.cc/e92au.

Barber, who currently holds a postdoctoral position at the University of Massachusetts Amherst, explained the study below.

“We compiled the results of more than 100 studies to show how insect-eating birds, bats and lizards benefit plants and help them grow. Because birds feed on plant-eating insects, they actually reduce the amount of damage these insects are causing to plants. Since plants use their leaves like solar panels to collect energy from sunlight, less damage from herbivores means more energy and more growth.

“Ecologists have shown this pattern before – in fact one of the first and most important experiments on the effects of insect-eating birds was performed by Robert Marquis, professor of biology at UMSL, about 20 years ago. He showed that birds in forests around St. Louis increased the growth of young oak trees. We gathered the result of dozens of experiments from around the world that were inspired by Marquis’ work to determine if this pattern held up across a variety of habitats, from prairies to tropical forests.

“Recently, ecologists had questioned how common this beneficial role of birds was because birds also feed on tiny predators like spiders which also eat spiders. Reducing the abundance of spiders could benefit herbivores, allowing them to eat more plants. But our study shows that birds, bats and lizards simply eat both the predators and the herbivores. The net result is still good news for trees:  fewer plant-eating insects, less damage to leaves, and more growth.