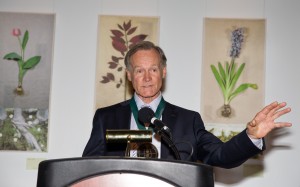 Raised in Tanzania and now a Kenyan citizen, Western has spent more than 37 years engaged in research in Kenya studying the interactions between livestock, wildlife and humans, with the aim of developing conservation strategies applicable at an ecosystem scale.

“Dr. Western is passionate about African wildlife and its open landscapes,” said Patrick Osborne, executive director of the World Ecology Center. “Through the African Conservation Center, he strives to integrate the needs and livelihoods of local communities with programs that conserve wildlife and natural resources.”

Also, local philanthropist and the center’s namesake, Harris, was remembered for his selfless work in the St. Louis community and as a prosecutor during the historic Nuremburg Trials after World War II, a successful attorney and an author.

“Each time I met Whitney I was taken by his warmth, enthusiasm, curiosity and commitment to what he believed in and willingness to actively work to make positive change in the world,” UMSL Chancellor Tom George said. “He stood as an example to us all.”

The Whitney R. Harris World Ecology Center has become, through its partnerships with the Missouri Botanical Garden and the Saint Louis Zoo, the premier institution for graduate studies in tropical ecology and biodiversity conservation. With graduate students from more than 20 countries working throughout the tropics, the center supports the largest group of tropical biologists in the world.