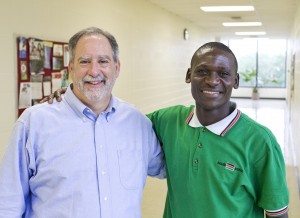 Arthur Oyange became interested in character education after his parents died from AIDS, and he was forced to drop out of college in his hometown of Nairobi, Kenya. He began taking part in community outreach work and discovered his passion for helping children.

“Children in Kenya face many challenges, some the same as American children,” said Oyange, who is director of the Nairobi-based Coalition for Character Building and Community Development, which he founded in 2005. “I started the coalition to help. We offer programs on everything and are a resource for the community.”

From a grassroots start, the coalition now covers all eight regions of Kenya and includes a network of more than 2,000 educators, youth workers and other volunteers. It has attracted the backing of the Kenyan government and the U.S.-based Global Peace Festival Foundation.

While conducting an Internet search about character education, Oyange came across the name of Marvin W. Berkowitz, the Sanford N. McDonnell Endowed Professor of Education at the University of Missouri–St. Louis. Berkowitz founded the Center for Character and Citizenship in the College of Education at UMSL in 2006 with Wolfgang Althof, the Teresa M. Fischer Endowed Professor of Citizenship Education. Through the center, they offer a wide range of professional resources in character education, including a leadership academy and several workshops.

“Arthur reached out to me, said he had a grassroots effort in Kenya and wanted to learn more about character education,” Berkowitz said. “He originally wanted to come to the U.S. to study with us, but I was unable to find a source of funding to support him. He doesn’t even have a bachelor’s degree yet and there doesn’t seem to be much funding for such. So instead I started sending him advice and resources. He would request books and I would buy them. I also sent him used electronic equipment for his presentations and training.”

Berkowitz said he embraced the opportunity to work with Oyange, share skills and expertise with him and eventually meet the man who had become his virtual colleague over the past several years. Then, Berkowitz said he the got the idea to bring Oyange to St. Louis to earn certification from the CharacterPLUS project and attend a session of the Leadership Academy in Character Education.

Through the help of funding from the Center for Character and Citizenship, Oyange, who is married and has two small children, made the weeklong trip to St. Louis. This was his first voyage to the U.S. He spent last week living in UMSL campus housing and taking part in workshops alongside 20 other educators.

“This opportunity is amazing,” Oyange said. “To meet Marvin, learn from him and to have the chance to take this knowledge home and apply it, it’s a great experience. I am very grateful.”

Berkowitz is now working on securing funding for Oyange’s first year of college in Kenya.