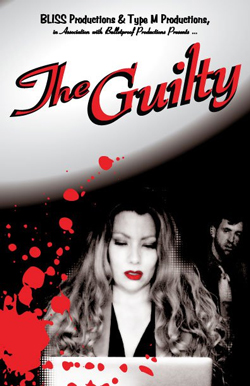 Artwork for short film "The Guilty"

St. Louis native Tim Powers, who earned a bachelor’s degree in communication in 1992 from the University of Missouri­­–St. Louis, said he was completely surprised to learn that the screenplay he co-wrote for “The Guilty” would be shown at this year’s prestigious Cannes Film Festival in Cannes, France.

Powers received a phone call from the director of the film, Randy Paik, who told him, “Hey, we made it.” Paik had submitted the film and further clarified by saying, “We made it to Cannes.”

Founded in 1946, the Cannes Film Festival is one of the world’s oldest and most significant film festivals. The festival ran May 12-23 and the film was shown at the Short Film Corner.

Powers describes “The Guilty” as classic film noir about a cheating wife, a dirty cop and a suspicious husband that runs about 10 minutes in length. He got the idea for the film by considering his options for telling a universal story quickly.

“I originally wrote the screenplay for the 48 Hour Film Festival competition in Los Angeles,” he said. “You get two days to complete a film from start to finish, so we had to work fast. I thought about the universal story of how everyone’s been betrayed or lied to at some point in their lives, and I went with it.”

Powers said he hasn’t recovered from the shock of the film reaching this level.

“Truth be told, I didn’t know the film was that good,” he said. “It was exciting, and quite an honor, to find out it would be playing at such an important event. It would be equally exciting if somebody would buy the screenplay and turn it into a feature film.”

Powers, 41, moved to Hollywood, Calif., in 2003. In addition to writing screenplays, he does voiceover work for Bang Zoom! Entertainment in Burbank, Calif., he is co-creator and co-producer of a new reality show pilot, and he can be seen performing stand-up comedy across southern California.

More in Alumni, Campus, School of Fine and Performing Arts