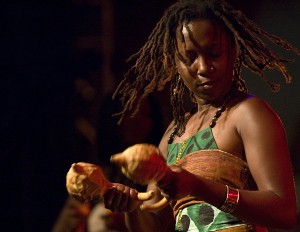 Chiwoniso will perform Feb. 26 at the Touhill.

The International Performing Arts Series will kick off its 2010-11 season with “Chinese Dance: Classical, Modern and Folk” on Sept. 18. In three acts – “Dragon Rhythm,” “Chinese Trend” and “Swing China” – this evening of dance will take the audience through a sweeping scope of Chinese culture. With dances titled “Painting Fan Dance,” “Sleeve Dance,” “Northeast Yangee (Handkerchief) Dance” and the “Han & Tang Dynasty Music Dance,” the performance promises an outstanding sample of the Chinese culture’s distinctive aesthetic.

On Oct. 28, The Maeandros Ensemble will perform its traditional folk, urban and classical music of Greece and the Near East. The result is an effortless blend of rich and varied traditions, a musical travelogue of the region.

“These aren’t musty re-creations,” noted the Chicago Reader. “The arrangements are lively, the performances are vigorous, and Kontanis’s singing glows with soulfulness and sorrow.”

Roughly translated, Taiko means “big drums” – and that’s exactly what Taikoza will deliver on Jan. 29. The group combines thunderous rhythms of ancestral Japanese drums with delicate melodies of bamboo flutes to revitalize an art form pulsing with energy. The stunning sound of the drums is but one dramatic feature of a Taikoza performance. Dancers in vivid, traditional costumes create a dynamic aspect as powerful for the eyes as the Taiko drums are for the ears.

Chiwoniso, one of the most exciting talents in African music today, will perform Feb. 26. Emboldened by the historic spirit of African music with perspective of American protest songs, Chiwoniso writes and sings brilliantly reflective, entrancing compositions. The American-born Chiwoniso grew up immersed in the music of her parents’ native Zimbabwe. As a teen, she lived among the Shona tribe in Africa and embraced the country’s music as her life’s work.

The IPAS will close its 2010-11 series with Triptych on May 12. Triptych are a vivacious three-part ensemble featuring fiddler Laura Risk, guitarist/percussionist/vocalist Paddy League, and dancer Kieran Jordan. This remarkable trio delivers elegant and soulful renderings of traditional music and step dance, from Irish, Scottish, and French-Canadian traditions. Each boasts a robust solo career, but as Triptych, these three accomplished performers create a tasteful yet gutsy sound and a visually invigorating live concert performance.

In addition to its five-show series, IPAS presents a special engagement of “Masters of the Fiddle,” featuring Natalie MacMaster and Donnell Leahy on Oct. 28. Two of the world’s most celebrated fiddlers, MacMaster and Leahy showcase Celtic music, dance and song in “Masters of the Fiddle.” MacMaster is an electrifying artist whose signature sound on the beloved four-string resonates with audiences around the world. She plays effortlessly, even while incorporating step dancing into the performance. And Leahy, with his Canadian powerhouse family band of eight musical brothers and sisters, has wowed audiences worldwide and sold more than half a million recordings.

Each IPAS presentation is an E3! performance, Explore – Experience – Engage. E3! pre-show discussions, which begin 50 minutes prior to the performance, and post-show receptions are free to ticket holders.

The Touhill’s ticket office is located on UMSL’s North Campus, One University Blvd. in St. Louis County (63121). All St. Louis-area students receive a 10 percent discount on two tickets with their I.D. Group and senior discounts are also available.

The Touhill is located on the North Campus at UMSL, just 10 minutes from Clayton. (Exit No. 240 from Interstate 70). Ample free parking is available, and the UMSL North Campus MetroLink Station is just steps from the Touhill’s main entrance.