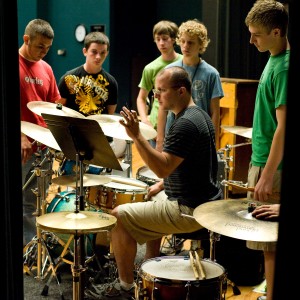 Miles Vandiver (sitting), lecturer in music at UMSL, leads a master class for drums at the Jazz Improv/Combo Camp.

Miles Vandiver unleashed a steady barrage of smacking and tapping on his drums. The rhythmic assault to his kit created a wall of sound that filled the auditorium in the J.C. Penney Conference Center at the University of Missouri–St. Louis. This was the UMSL Jazz Improv/Combo Camp, offered through the Division of Continuing Education. Sort of.

Vandiver, a lecturer in music at UMSL and instructor at the camp since its 2002 inception, performed for an audience of none. He did so uninterrupted for at least 10 minutes and probably would have gone longer had no one entered the room. He seemed to be having a blast killing time in anticipation of the arrival of his master class, a camp highlight for him.

Jim Widner, director of jazz studies at UMSL and camp creator, said such infectious enthusiasm from instructors is one reason about 50 students attend the camp each year. Another major attraction, he said, is the opportunity to work closely with guest artists from throughout the country.

“These are some of the finest professional jazz musicians playing today,” Widner said. “Rarely will young musicians have the chance to play with and learn from so many great artists in one setting.”

Camp is open to students from middle school through college, as well as adults. This year’s participants spent June 13 through 18 working with eight jazz musicians at UMSL. They honed their jazz improvisation and combo playing, participated in instrument master classes and ear training, and took in daily jam sessions performed by their instructors.

Michala Burton, a bassist whose instrument stood nearly as tall as her, will be a senior at Fort Zumwalt North High School in O’Fallon, Mo. She marveled at the different styles her instructors’ performed.

Widner, a former touring member of the Kenton Orchestra, gained an interest in music education when he worked at Stan Kenton’s innovative jazz camps for 10 years. During that time, he helped Kenton’s camps expand their reach beyond their California base. After Kenton died, there was a break for about nine years before Widner, with the endorsement of the Stan Kenton Estate, began operating the camps again. The one stipulation is that he couldn’t use the late big band leader’s name, but Widner made sure to run the camps in Kenton’s manner. The camps have maintained a strong reputation, receiving accolades in publications like DownBeat, a nationally published jazz magazine.

Philip Haas, a graduate of Westminster Christian Academy in St. Louis, just completed his freshman year at a university in Nashville. The drummer came home this summer to attend the camp and work with Vandiver.

“I know Miles is a really good drummer and I wanted to learn from him,” Haas said. “Also, it’s been good to play with other musicians. It’s one thing to practice on your own, but you have to play with others to keep time with them.”

Vandiver, while enjoying his drum soloing before class, said that’s what the camp was all about: playing together.

“We want to teach them the fundamentals and techniques to have a good grasp of what it takes to be a professional musician,” he said.

More in Campus, faculty, School of Fine and Performing Arts