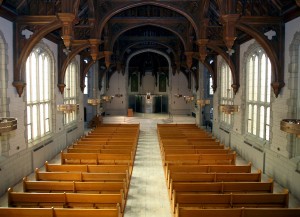 A decade ago, few people could have imagined the University of Missouri–St. Louis as a wedding destination. Today Allyson Bowes, coordinator for University Conference Services, says the wedding business is booming.

She credits the nearly century-old chapel in Provincial House for the increased interest. The chapel’s Norman Gothic architecture with its soaring hammer beam ceiling, tall windows and gleaming white marble floors sell the space for most couples.

The chapel is one of seven buildings acquired by the university in 1999 from the Daughters of Charity and one of the last building acquisitions on the 44-acre South Campus. The Provincial House is now home to the Pierre Laclede Honors College and residence halls. The chapel’s religious artifacts moved with the order of nuns to their new home and subsequent repairs and renovation have restored the chapel to a non-denominational space that would fit most wedding themes.

“Couples bring their own officiate – religious, secular, whoever that may be – and do their own planning for the ceremony,” Bowes said. “There’s a seating capacity of 350, and we have a piano and beautiful pipe organ in full working order. Ceremonies run from traditional religious events to the unconventional with songs like Etta James’ ‘At Last’ replacing ‘Here Comes the Bride.’”

The first UMSL wedding in the chapel was held in 2000. Bowes said most weddings are happy occasions, but since she took over conference duties in September 2006, she’s witnessed a few wedding horror stories.

“Brides faint, grooms faint,” Bowes said. “We had one bride who was an hour late getting here because of some drama with the mother. The guests actually waited an hour and half for the ceremony to begin.”

Bowes said a university connection is not needed to rent the chapel, and the rental fee is $850.  The cost includes two dressing areas, sound equipment and other amenities.

“We only book one wedding each Saturday, so we’re not herding people in and out of the chapel,” Bowes said. “It’s their special day, and we do everything we can to keep it that way.”

The university also offers catering and event spaces for rehearsal dinners and receptions.

Bowes added that the UMSL campus’ location is adjacent to major interstates and a short drive to local popular reception destinations downtown, in Clayton or St. Charles. She advertises in St. Louis Bride magazine, on http://www.theknot.com and relies heavily on her happily married past customers. But the chapel’s majestic presence usually seals the deal.

“When Melissa’s mother saw the chapel’s stained glass windows, she burst into happy tears and Melissa knew for sure it was the right place,” one testimonial stated.

To book a wedding, call Bowes at 314-516-4399 or visit the Provincial House Chapel Website at http://www.umsl.edu/~umslconf/wed.html.