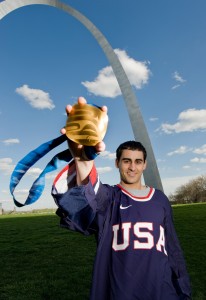 St. Louis was well-represented among the winners of last night’s ESPYs, the annual awards for athletic achievement given by ESPN. Albert Pujols and Steve Cash both took top honors. You might have heard of that Pujols guy, who was named Best Baseball Player, but who’s Cash?

The University of Missouri–St. Louis sophomore and U.S. sled hockey goalie did the unthinkable earlier this year. Cash didn’t allow a single goal en route to a gold medal for the U.S. sled hockey team in the 2010 Paralympic Winter Games in Vancouver, British Columbia. His scoreless run was a first in tournament history. Now an ESPY Award for Best Male Athlete with a Disability shares mantle space with his Paralympic gold medal.

ESPN flew Cash and his mother first class to Los Angeles for the awards show. He had low expectations that he’d win up until they flashed his name on the big screen.

“I guess my jaw just dropped,” Cash said. “It was actually just kind of overwhelming to see. I was in shock. Afterwards, my mom and I hugged. I was pretty excited.”

While there, he hoped, but failed to meet Pujols (the slugger didn’t attend) or Patrick Kane and Ryan Miller, a pair of National Hockey League stars he spotted. Alas, he happily settled for once again bumping into snowboarding gold medalist Shaun White. The two previously met during an Olympian and Paralympian visit to the White House.

Cash has worn a prosthesis since he was 3 when part of his right leg was amputated after he was diagnosed with cancer. The Overland, Mo., resident was only 15 when he earned a spot on the U.S. National Sled Hockey Team. He became a starter in 2007.

Now 21, Cash is majoring in business administration at UMSL. He’s currently in the midst of a summer internship in the public affairs department of The Dow Chemical Co. in Midland, Mich. In addition to his internship duties, he’s been hard at work trying to start a sled hockey team in Midland. Cash has already cleared ice time at the local rink. Next he plans to lead demos and clinics to drum up interest in the sport.

And he’s far from finished with competitive play.

“I plan on playing sled hockey for as long as my body allows me to,” he said.