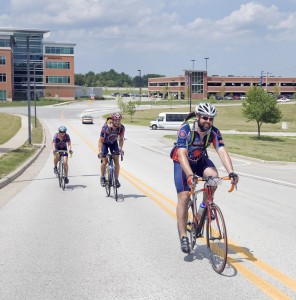 Bike & Build riders (left to right) Mary Kate Long, Adam Rivard and Ross Creed arrive on campus after bicycling 79 miles from Salem, Ill. They were on day 27 of 68 and have completed 1,358 miles of a projected journey of 3,755 miles. Their journey began in Boston and will conclude in Santa Barbara, Calif. (Photo by August Jennewein)

The University of Missouri–St. Louis last week served as host to 32 bicyclists who are on a 3,755-mile trip across the United States. For the fifth straight year, UMSL provided shelter to members of Bike & Build, a charitable group that organizes cross-country bicycle fundraising trips to benefit efforts to build affordable housing.

Bike and Build participants come from all over the country. Mary Kate Long, 21, is a senior at Smith College in Northampton, Mass. A resident of Harrisville, N.H., she’s new at cross-country cycling.

“This is incredible,” she said. “What a way to see the country.”

“I found out about Bike and Build on Craigslist,” said Creed, a graduate student at Temple University in Philadelphia. “This whole experience has been awesome, just a blast.”

Cycling in from Salem, Ill., the group of 17 women and 15 men began arriving at 3 p.m. last Wednesday. Over the course of the 82-mile ride, the cyclists spread out over the route and arrived at the UMSL campus in groups of twos and threes.

They were in St. Louis for two days, one of which they spent helping renovate a house in the Old North St. Louis neighborhood for Habitat for Humanity. At UMSL, the group camped out in two classrooms in the Mark Twain Athletic & Fitness Center.

Bike & Build has nine groups of cyclists in various stages of their cross-country routes. The cyclists at UMSL were Bike & Build’s “Boston to SB 2010” group, traveling from Boston to Santa Barbara, Calif.

Kelsey Breck, one of the route leaders for the Boston group, said the cyclists raise money in a variety of ways. Some riders send letters to friends and families asking for donations, and others do more creative things.

“For example,” she said, “one rider this year organized a speed-dating event at her college to raise money, and she walked away with more than $500. Before beginning the trip each rider must raise at least $4,000 in whatever way they choose, and the majority of that money goes to the affordable housing cause.”

Larry Coffin, manager of Recreational Sports at UMSL, serves as host for the riders.

“I think this is just a great project,” he said.” It was a pleasure to host the Bike and Build group for the fifth consecutive year. After they ride all day in scorching heat, get up the next morning at 4:30 a.m., and spend all day helping build affordable housing, anything we can do to make their stay here as comfortable as possible is our goal. I have a great respect for what they do, and look forward to helping them annually.”

Over its seven-year existence, Bike & Build has contributed $2,305,345 to housing groups across the country, spent 63,500 hours building affordable housing, and engaged more than 1,000 young adults in spreading the word about the affordable housing crisis in America. By the time the cyclists reached St. Louis, they had covered 1,358 miles.