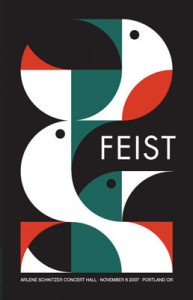 A poster designed by Dan Stiles and promoting a 2007 Feist concert in Portland, Ore., is part of the "POSTGIG" traveling exhibit.

St. Louis native Rosalyn Schwartz makes rich, vibrant and intense paintings. Clifford Stoltze has compiled an impressive collection of modern music concert posters. The artist collective at Wildwood Press are known for their experimental prints. These works are among the many that will be on display for the 2010-11 exhibit season at UMSL’s Gallery 210.

The next season at Gallery 210 will include the following exhibits:

From Aug 26 to Dec. 4, “Exposure 13” will feature artwork by local artists Joe Chesla, Martin Brief and Asma Kazmi. The exhibit is part of a long-running annual series hosted by Gallery 210. The goal of the series is to present new and challenging work by local artists.

From Aug. 26 to Oct. 9, the gallery will display “Robot Love,” a video exhibit by Hilary Harp. Inspired in part by the cover of “Megatron Man,” Patrick Cowley’s archetypal 80s disco album, “Robot Love” is a celebration of the playful, synthetic, party-driven and disposable culture of disco.

From Oct. 21 to Dec. 5, “Rosalyn Schwartz: A Survey of Paintings” will feature paintings and works on paper by Schwartz from 1995 to present. Schwartz is a professor emeritus of painting at the University of Illinois at Urbana-Champaign. Her bold paintings are sometimes abstract, occasionally brooding and always intense.

From Oct. 28 to Dec. 5, the gallery will present “No Damage,” by Caspar Stracke. The video art is a composition made of fragments from more than 80 different feature and documentary films showing the architecture of New York City.

From Jan. 20 to March 12, the gallery will feature “POSTGIG,” a compilation of music posters curated by Clifford Stoltze, founder and creative director of Boston-based Stoltze Design. The traveling exhibit will feature posters created by several collectives, including Modern Dog, Aesthetic Apparatus, Patent Pending, The Small Stakes, Seripop, Hammerpress and The Decoder Ring.

From Jan. 20 to April 2, the gallery will exhibit “Poster Girl,” a video by Hester Scheurwater, that depicts the protagonist’s nightmarish visions, thoughts and fantasies.

From April 7 to 30, the annual exhibit “Parental Advisory” will feature artwork by students from the Bachelor of Fine Arts program in the Department of Art and Art History at UMSL.

From April 7 to May 28, the gallery will show “Suspension.” The video by Nicolas Provost lets go of realist constraints and goes back to the mirror images of some of the Brussels-based visual artist’s earlier work. Provost’s work often walks the fine line between dualities, creating a balancing act between fiction and fine arts, the grotesque and the moving, and beauty and cruelty.

From May 13 to 28, the gallery will present “Collaboration” featuring work by students from Central Visual and Performing Arts High School in St. Louis and Hazelwood East High School in Missouri. The annual exhibit was previously known as “Portfolio” and focused on work by graduating students from St. Louis’ magnet school for the arts. This year, the exhibit will also feature collaborative art between Hazelwood East and Central VPA students.

Gallery 210 was established in 1976 at UMSL. It was named for its initial location, 210 Lucas Hall. The gallery has since grown to include three exhibition spaces and a 50-seat auditorium at its current location, the Telecommunity Center at UMSL, One University Blvd. in St. Louis County (63121).

Gallery hours are 11 a.m. to 5 p.m. Tuesday through Saturday or by appointment. All exhibits are free and open to the public.

More in Campus, Events, School of Fine and Performing Arts