Building maintenance is a year-round task for UMSL staff 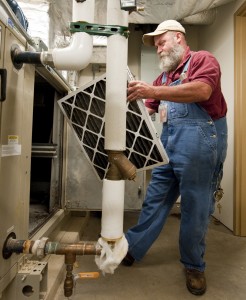 Dave Vogler, lead maintenance mechanic with Residential Life at UMSL, installs new filters in the heating and cooling system at Oak Hall in preparation for the 2010-11 school year.

It’s safe to assume that staff members at the University of Missouri–St. Louis have a lot to do in preparation for the arrival of students in the fall. The truth is they always have a lot to do no matter what time of the year it happens to be.

Take, for example, Steve Bene, supervisor of Facilities Services for Residential Life at UMSL. He oversees a team of five workers – including himself – who tend to the maintenance needs of 11 buildings on and near the UMSL campus that serve as student housing.

Bene (pronounced be-NAY) says that preparations for the next academic year begin as soon as last year’s students depart.

“We have to go through and fix everything they broke,” he says, with a laugh.

Bene says that because some UMSL residence halls are utilized almost year-round, he and his team have to maintain the buildings on a constant basis.

“When the regular students leave, we have to go in and re-beautify the buildings, and gear up for conferences,” he said.

The university hosted several conferences this summer, including the Xtreme IT! Summer Academy and the Missouri Legislative Black Caucus Foundation’s Youth Leadership Conference, with the conference attendees staying at Oak Hall.

Despite the presence of these students, this year, Bene and his team painted the entire interior of Oak Hall, a four-story residence hall that houses 426 units.

“Well, the building is five years old, now. It really needed painting,” he said. Painting the building took about a month and a half, he said, adding that the work was interrupted by other maintenance tasks.

Jonathan Lidgus, director of Residential Life at UMSL, said that when the regular undergraduate students move out for the summer, he meets with Bene and Renee Crothers, a custodial supervisor, to assess conditions in the living quarters and map out a strategy for addressing those conditions. He extolled the work of both the maintenance and custodial teams.

“They do a great job on those buildings,” he said. “They’re my heroes of the summer.”