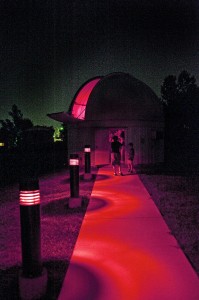 Sarah Workman creates a silhouette as she waits for her husband and son outside the Richard D. Schwartz Observatory at the University of Missouri–St. Louis Saturday night.

The long path heading to the dome-shaped observatory is dimly lit to ensure good viewing of planets, stars and systems in the sky.

“How often do you get to look out of a telescope that big?” responded Workman, of Festus, Mo., when asked what brought her to the observatory on a weekend night. “It was definitely worth it.”

“This is great,” Schuetz said . “I’ve always had an interest in astronomy. We will come back for sure.”

The moon was the hit of the night. Bright and white, it filled the telescope’s lens yielding crisp and clear craters for all to see. Also on the agenda were Venus, Saturn and Mars.

“It looks like a stamp,” said Mary Huhmann, 12, of Florissant, Mo., after viewing Saturn with its telltale rings. Huhmann, who likes to check out planets with her own telescope at home, said it was great to peer through a much larger model.

“I just love space,” she said, as her dad, Dean, proudly beamed at his daughter’s interest.

Eva Vandegriffe and her family drove all the way from Eureka, Mo., to experience the sky.

“My husband (Brian) was watching the recent meteor shower, and astronomy is next on our list of homeschooling activities, so it was perfect to come here,” she said. “We love it. And it’s nice that it’s family friendly.”

Shane Meyer, who is studying physics and astronomy at UMSL, works the open houses.

“It’s fun,” he said. “There are so many kids who are interested in astronomy. It’s great to see them asking questions. And some of them know things you would not think they’d know.”

The Richard D. Schwartz Observatory has been in operation since 1981, although it was moved to its present site on the north campus in 2008. Inside, there is a permanently mounted Celestron telescope with a 14-inch mirror. There also are several portable 8-inch telescopes that can be set up outside at public open houses. Open Houses are sponsored in part by the NASA/Missouri Space Grant Consortium.