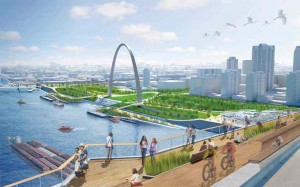 This rendering by the Weiss/Manfredi team, along with other designs for the Arch grounds, will be on display at UMSL Sept. 7 through 9.

Five team finalists are competing to revitalize and connect the areas surrounding the Gateway Arch, including the Missouri and Illinois riverfronts and accompanying parks. Their design concepts will be on display Sept. 7-9 in the J.C. Penney Conference Center lobby at the University of Missouri–St. Louis.

The designs are on display now for the public to view and comment on at the Gateway Arch Visitor Center through Sept. 30, and the traveling exhibit will be visiting sites throughout the St. Louis region through Sept. 26. The competition winner will be announced Sept. 24. The project winner’s design is expected to be completed by Oct. 28, 2015, the 50th anniversary of the completion of the Arch.

“The Gateway Arch is an important symbol for our region and our nation. We are pleased to be able to bring the competition finalists’ entries into the communities throughout the St. Louis region, so that people throughout the area get a chance to see what’s happening in the heart of our community,” said Tom Bradley, superintendent of the Jefferson National Expansion Memorial, and member of the competition’s governing group.

The competition launched Dec. 8 and mimics the competition held in 1947 to produce a memorial to Thomas Jefferson’s Louisiana Purchase and the era of American Westward Expansion. The jury selected the striking stainless steel arch designed by the talented Eero Saarinen. His vision was completed in 1965. It quickly became a national icon and one of the world’s premier works of public art.

While the Arch itself has remained magnificent over time, the area surrounding it needs to be enlivened. The National Park Service called for a new plan to “better frame this American masterpiece.” In addressing this, the finalists’ designs focus on the disconnect between the Arch and its surrounding areas and strive to intertwine the Arch grounds with the rest of the city, including Interstate 70 and the Mississippi River. The goal of the competition is to find a model from “the best of the best” designers, and the goals of the project are to bring more people to the Arch for first and repeated visits, invigorate the region and enhance the overall community.

The competition is in the third and final stage. Stage I consisted of a description of the lead designer, design intent and philosophy, and a profile of the design team with examples of their work. Stage II included the formation of complete teams, submission of required qualifications and a jury interview. After Stage II, the competition field was narrowed to five teams. The teams remaining in the competition are the Behnisch Team; MVVA Team; PWP Landscape Architecture, Foster + Partners, Civitas; SOM, Hargreaves, BIG; and Weiss/Manfredi Team. These teams will compete in Stage III, which includes exploring each team’s design approach and testing their working methodology.

While each team has many differences, some common design plans include capping I-70, and expanding the Arch grounds westward to bridge the Arch with the rest of downtown. Some differences include ways to incorporate Laclede’s Landing and Chouteau’s Landing into the Arch grounds. Additional design examples include amphitheaters, walking/biking bridges, wetlands, farmers’ markets and boardwalks for a wide variety of activities.