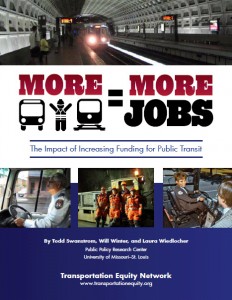 Transit spending is a path to job growth, according to a new report prepared by the Public Policy Research Center at the University of Missouri–St. Louis for the Transportation Equity Network.

The report, “More Transit = More Jobs,” was released today (Sept. 2) and includes rankings of 20 U.S. metropolitan areas by their percentage of transit spending. St. Louis was featured in the report and ranked last of those areas studied.

The report was written by three UMSL researchers: Todd Swanstrom, the E. Desmond Lee Endowed Professor of Community Collaboration and Public Policy Administration; Will Winter, research associate at the PPRC; and Laura Wiedlocher, a political science graduate student and graduate research assistant at the PPRC. The authors showed in their report that shifting 50 percent of transportation funds from highways to transit would result in an overall increase of 180,150 jobs over five years across the 20 metro regions studied.

“Our analysis demonstrates that metropolitan areas could generate more jobs without spending another dime on transportation by simply changing priorities within transportation spending,” the authors wrote in the report.

The report also indicated 800,000 more jobs could be generated with the passage of a transit-friendly national Transportation Authorization Act.

Several case studies were included in the report, including The Northside-Southside MetroLink extension. The 17-mile light-rail line would run from north to south through St. Louis and St. Louis County. It was approved in 2007 by the Board of Directors of the East-West Gateway Council of Governments. If the proposed MetroLink expansion moved forward, UMSL researchers estimate it would cost about $971 million and have a direct job impact of 23,098.