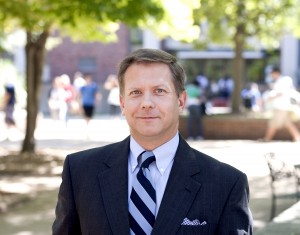 Grant Black is the new director of the Center for Entrepreneurship and Economic Education at UMSL.

After growing up in St. Louis and earning his bachelor’s and master’s degrees in economics from the University of Missouri–St. Louis, Grant Black says he feels like he’s home again in his new position as director of the Center for Entrepreneurship and Economic Education at UMSL.

Black, who also is a teaching professor in economics at the university, said he’s happy to return.

“It’s great to be back on campus and to interact with many people who I know, have worked with and learned from,” he said.

“I’m excited about working with K-12 schools in the area to continue the incredible work the center does,” he said. “However, I’m also looking forward to exploring new avenues for the center and broadening our reach to the community with different programs and opportunities for all ages.”

Black fills the position left vacant for more than a year. Sharon Laux had served as the interim director and now resumes her duties as associate director of the center.

Prior to joining UMSL, Black was an associate professor of economics at Indiana University in South Bend. He also served as the director of the Bureau of Business and Economic Research, which focused on local and regional economic issues; and the director of the Center for Economic Education, which included educational workshops and events on economics.

His research focus includes local and regional economics, the economics of science and innovation, and other economic issues. In addition to numerous scholarly articles, he wrote the book, “The Geography of Small Firm Innovation,” published in 2004 by Kluwer Academic Publishers.