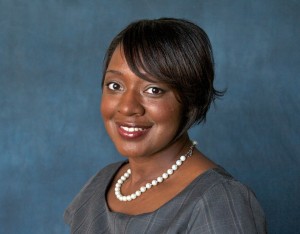 Natissia Small, director of the Office of Precollegiate Programs at the University of Missouri–St. Louis, was among 30 young professionals who received the 2010 "NCI Salutes 30 Leaders in their Thirties" Award during a luncheon Friday at Norwood Hills Country Club.

Natissia Small, director of the Office of Precollegiate Programs at the University of Missouri–St. Louis, was among 30 young professionals who received the 2010 “NCI Salutes 30 Leaders in their Thirties” Award during a luncheon Friday at Norwood Hills Country Club in Ferguson, Mo.

North County Inc., a regional economic and community development organization, recognized the 30 individuals for their contributions to their profession and community. In addition to Small, who holds two degrees from UMSL, the honored group included four other UMSL graduates.

Small said the award was both gratifying and inspiring.

“I am humbled and honored to receive such recognition as one of NCI’s ’30 Leaders In Their 30s,'” Small said. “I find it a privilege to lead a department at this institution with a specific mission to prepare and encourage youth to seek post-secondary education. Most importantly, (I am) provided an opportunity to empower others to become key resources and give back to those in the community. This award is not only one that I consider an honor to receive, but it speaks volumes to the impact of what those we serve in the community need to reach higher levels of achievement.”

Gateway Television News Network and the North County Suburban Journals are partners with NCI in the event. UMSL is a member of NCI.

“These young business, civic and community leaders are impressive,” said Rebecca Zoll, president and CEO of NCI. “They are excelling in their professions, as well as volunteering for area civic and charitable organizations and making a difference in our community. ‘NCI Salutes 30 Leaders in their Thirties’ is our way of saying ‘Thanks for your contributions.'”

The UMSL alumni who were honored are:

Natissia Small, MEd secondary education-adult education 1999, MEd counseling education 2009, 38, was appointed director for the Office of Precollegiate Programs in April 2007. She oversees all college access services and programming for the Division of Student Affairs. Small has been with UMSL since 1995 and served as a coordinator in the Office of Student Financial Aid and clinical instructor for the Bridge Program. Small serves as a member of the RESPECT Campaign Committee, National College Access Network and the Missouri Association for College Admissions Counseling. In October 2008, North County Churches Uniting for Racial Harmony and Justice recognized her as Mentor of the Year. She holds a bachelor’s degree in mass communication from Southeast Missouri State University. She and her husband, Terrence, have five children: Ciarra, Ty, Jalen, Christopher and Justin.

Demetrius Adams, BSEd 2000, MEd 2003, 36, is the assistant principal at Berkeley Middle School in the Ferguson-Florissant School District in St. Louis County, Mo. Prior to accepting this position in 2009, Adams was a teacher in the Hazelwood and Lindbergh school districts. He volunteers to mentor boys in grades seven through 12 through his involvement with Kappa Alpha Psi fraternity. Through field trips, local college visits and other activities, he encourages area youth to aim high and provides support to help them reach their goals. He has successfully implemented a similar mentoring program and played a key role in implementing a positive behavior support project at Berkeley Middle. Adams is single father with four sons.

Samuel Anselm, MPPA 2003, 34, is the assistant to the city manager for the city of Ferguson, Mo. He assists with the recruitment and retention of businesses in Ferguson, oversees the human resources, information technology and public relations departments, and assists with special projects. Sam was instrumental in Ferguson being a finalist for the National Civic League’s 2010 All-American City competition. He helped save the city $60,000 per year by overseeing the successful implementation of a new phone system and information technology infrastructure. He is a member of the International City Manager’s Association, Missouri City/County Management Association and St. Louis Area City Manager’s Association. He chairs the Staff Relations Team at Morning Star Church in O’Fallon, Mo. He and his wife, Jennifer, have three children.

Andrew M. Roth, MS management information systems 2004, MBA 2010, 32, is a manager of eligibility operations at Express Scripts Inc. in St. Louis. He oversees day-to-day operations of the eligibility department and leads a team of eligibility analysts who electronically manage hundreds of client eligibility files containing data for millions of Express Scripts members. He is also involved in assisting the client benefit department with issue management and resolution for the WellPoint-NextRx acquisition and migration effort. Roth is a member of the UMSL Alumni Association, Saint Rose Phillipine-Duchesne Parish and the Sigma Tau Gamma Fraternity Alumni. Last year, he volunteered through Express Scripts at Logos School in reconfiguring computer equipment for the students and staff. In 2006 and 2007, he served on the tax increment financing commission for the city of Florissant and the citizens participation committee in 2005.

Jason Van Beers, BSEd elementary and secondary education 1998, 35, is the principal of Drummond Elementary School in the Pattonville School District in north St. Louis County. Prior to becoming principal in 2006, he was the assistant principal at Drummond for three years. He served as administrative liaison between the Special School District and the Lindbergh School District prior to his move to Pattonville. As principal, Van Beers cares for 590 kindergarten through fifth-grade students. He plans after-school activities and special events for students and their families in order to encourage support and community within the school. He is Drummond Elementary School Improvement Facilitator, Drummond PTO Officer, a member of the Association for Supervision and Curriculum Development, and president of the St. Charles County Hawg Hunters Bass Club. Van Beers runs a soda tab drive at Drummond for St. Jude’s Children’s Hospital. He holds a master’s degree in educational administration from Lindenwood University in St. Charles, Mo.