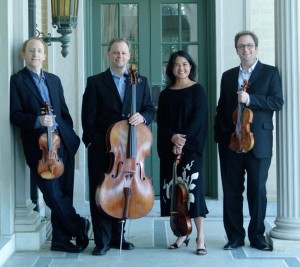 The audience has served as the curator for the next Arianna String Quartet concert. The ASQ allowed audience members to select three songs for their concert “By Request,” which begins at 8 p.m. Oct. 29 in the E. Desmond and Mary Ann Lee Theater at UMSL’s Blanche M. Touhill Performing Arts Center. A pre-concert discussion will begin at 7:10 p.m.

The three audience-selected masterpieces include “Quartettsatz” by Franz Schubert, Quartet in F Major by Maurice Ravel and Quartet in G minor, Op. 27 by Edvard Grieg.

“This was the first time we turned to our audience for such interactive programming,” ASQ violinist John McGrosso said, “and it was really exciting to see the enthusiastic response.”

The votes for By Request were collected over a five-month period between the quartet’s concert last spring and the first concert of its 2010-11 St. Louis series.

“They had 12 pieces from which to choose, and we are thrilled with the results,” ASQ violist Joanna Mendoza said. “It will be a fantastic evening of music – and the audience will beam with pride knowing they programmed it.”

“By Request” will showcase Schubert’s thrilling miniature “Quartettsatz” in c minor. Filled with sizzling drama, this action-packed, single-movement work finds Schubert at his soulful best, and promises a musical journey like no other.

Ravel’s seminal Quartet in F Major follows with an intriguing blend of suave French style and Indonesian gamelan music. Emanating from the wash of color conjured during the late 19th century French Impressionist movement, Ravel’s poignant Quartet in F Major remains one of the most important works of the early 20th century, and is always an audience favorite.

The ASQ will closes “By Request” with Edvard Grieg’s enthralling Quartet in G minor, Op.27. Known for his electrifying nationalistic style, Grieg propels his G minor String Quartet with Norwegian folk traditions, and creates a sense of Scandinavian beauty unparalleled in the quartet repertoire. Guaranteed to dazzle listeners, Grieg’s Quartet in G minor is the perfect close to this festive evening dedicated to the Arianna Quartet’s audience.

Formed in 1992, the ASQ is the Quartet-in-Residence at the University of Missouri-St. Louis and the Touhill Performing Arts Center. This internationally acclaimed ensemble – violinists John McGrosso and David Gillham, violist Joanna Mendoza and cellist Kurt Baldwin – has been hailed as one of the cultural gems of the St. Louis region by Sarah Bryan Miller of the St. Louis Post-Dispatch. In addition to their concert series in St. Louis at the Touhill, the Arianna Quartet routinely performs throughout the United

Each ASQ concert is an E3! performance, “Explore – Experience – Engage.” E3! pre-show discussions, which begin 50 minutes prior to the performance, and post-show receptions featuring wine tasting and bakery treats are free to ticket holders.

The Touhill’s ticket office is located at One University Blvd. in St. Louis County (63121). All St. Louis-area students receive a 10 percent discount on two tickets with their I.D. Group and senior discounts are also available.