UMSL kicks off support of annual campaign by unveiling statue 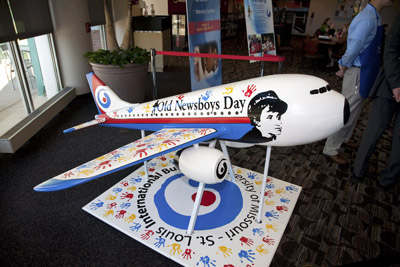 A new airplane statue made its debut Nov. 8 at the Millennium Student Center at UMSL to kick off the International Business Institute’s annual participation in the Old Newsboys Day campaign. The unveiled airplane statue allows for early donations leading up to the campaign.

A six-foot wooden airplane landed on the first floor of the Millennium Student Center at the University of Missouri–St. Louis Monday as members of the International Business Institute kicked off their annual participation in the Old Newsboys Day campaign. The unveiled airplane statue allows for early donations leading up to the campaign.

Michael Costello, assistant teaching professor of finance and legal studies, is the faculty liaison to the campaign. He commissioned local artist Chris Carter to construct the statute to represent UMSL’s international business students’ dedication to the community and the campaign’s support of children. The annual campaign, sponsored by the Suburban Journals of Greater St. Louis, raises funds for more than 200 local charities. The Fundraiser takes place the Thursday before Thanksgiving when volunteers hit the streets hawking special editions of the newspaper. UMSL volunteers will sell the newspapers Nov. 18 at Lambert-St. Louis International Airport.

“Teaching at UMSL is not only a wonderful opportunity to share what I learned during my international business career, but also encourage students to seize the opportunity to be leaders in their community, especially by working with their classmates and to remember their responsibility to give back to their community,” Costello said.

He said the statue and the adjacent giving box will allow for individuals to donate to the campaign without being present at the airport the morning of the event. After departing the MSC, the statue will arrive at Lambert, where it will be on display and collecting donations throughout the campaign.

During the unveiling Monday, Jay Shields, chair of the president’s club for Old Newsboys Day and president of Schaeffer Manufacturing, praised UMSL for its support.

“UMSL’s involvement in Old Newsboys Day has been amazing,” he said. “Chancellor Tom George and UMSL faculty and students have all contributed toward the annual fundraising efforts for the 250 children’s charities we support.”

Carlos Suarez, UMSL alumnus and metro area president of the Junior Chamber International, said his experience with the campaign taught him the value of community outreach and the importance of giving back.

“As a past member of the Old Newsboys Day Committee, not only did I build relationships with community leaders, but it was very special to help contribute to a community project that positively impacts many children’s charities. As a university with a diverse pool of students, it creates a great opportunity to embrace a local community project while also recognizing different cultures,” he said.

Volunteers are still needed for Nov. 18. Students interested in participating in the Old Newsboy Day campaign should contact Costello at costellom@umsl.edu.