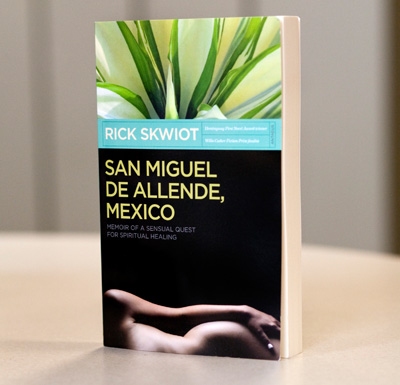 Today University of Missouri–St. Louis alumnus Rick Skwiot is an award-winning author of several books, but in 1965 he was just a freshman beginning his education at UMSL. His university experience challenged and changed him.

“Many students were first-generation university students like me – ethnic, eager to break from working class backgrounds,” he said. “It was intellectually and socially stimulating. It made me think about living large, having a life of the mind.”

And live large he has. After earning a BA in sociology in 1970 from UMSL, Skwiot spent a large part of the 1980s in San Miguel De Allende, Mexico, trying to understand the culture and find himself.

Those years in Mexico provide much of the basis for his new memoir, “San Miguel De Allende, Mexico: A Memoir of a Sensual Quest for Spiritual Healing.” His sojourn was filled with struggle, drama, seemingly supernatural occurrences, beautiful settings, humor and even a little sex and violence – the perfect subject for a memoir.

“In writing a memoir you get to use all your skills as a novelist and fiction writer, but you don’t have to spend all that time making it up and agonizing over plot, characters and causality,” he said. “Also, nonfiction has a certain credibility and accessibility for many readers who may not always buy into fiction. It’s simply another way at getting at the truth.”

Skwiot’s native St. Louis makes several appearances in the book as he periodically returned to Missouri in order to work to finance additional time in San Miguel De Allende. And even though he currently lives in Florida, he still makes it back to St. Louis several times a year.

“No living relatives left here,” he said, “but many friends and memories – of all sorts.”

Rick Skwiot has come a long way since those days as a freshman at UMSL and said a thousand things have shaped him, including his love of life and literature.

“Even as a child, I was interested in dramatic stories and books and hypersensitive – all helpful characteristics of a writer,” he said. “I’ve also learned self discipline and self reliance. Nothing good is ever accomplished without hard work and dedication, and no one else can do it for you.