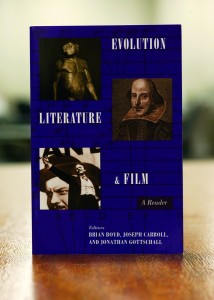 "Evolution, Literature and Film: A Reader" is one of several publications released in 2010 and 2011 that involve Joseph Carroll, Curators' Professor of English at UMSL. He is a co-editor of this book, creator of an annual journal and author of a forthcoming book.

Joseph Carroll, Curators’ Professor of English at the University of Missouri–St. Louis, first read Charles Darwin’s “On the Origin of Species” and “The Descent of Man” about 20 years ago. It was a transformative experience for the scholar. He soon began applying Darwinism to literary study, coined the term “Literary Darwinism” and became “its foremost practitioner,” according to The New York Times.

For the two decades since experiencing his revelation, Carroll has worked to integrate evolutionary social science with literary humanism. He wanted to shed light on the evolution of human imagination, much the same way scientists have studied biological evolution.

This year has been particularly productive for Carroll. His name has been attached to The Evolutionary Review, a journal he helped create; and “Evolution, Literature & Film: A Reader,” a book he co-edited. As the year winds down, preparations are underway for the March releases of both the journal’s second volume and a new book written by Carroll, “Reading Human Nature: Literary Darwinism in Theory and Practice.”

“Evolution, Literature & Film” and The Evolutionary Review are similar in that they both feature Darwinism essays from some of movement’s top scholars. That’s where the comparisons stop.

The book includes a collection of mostly older essays and is designed to form the core for courses focused on evolutionary study of literature and film. The annual journal features all new material focusing on a wider array of topics, including religion, popular culture, technology, visual art, music, politics, ideology and ecology. The styles also differ.

“We certainly didn’t want the contributions to the reader to be dull, but they are fairly sober in demeanor – ‘academic’ – though not in a bad sense,” Carroll said. “The Evolutionary Review is meant to be serious, but also, always, to be fun. We put a high premium on humor, wit and stylistic play. We think of it as not so much a scholarly tome as rather a serious ‘magazine.'”

For “Evolution, Literature and Film,” Carroll worked together mostly by e-mail with Pennsylvania-based Jonathan Gottschall and New Zealand-based Brian Boyd.

“For several months, we exchanged I suppose literally thousands of round-robin e-mail messages,” Carroll recalled. “One of us would propose an essay or make a suggestion about a whole section of the anthology, and the other two would chime in with opinions – agreements, objections, reservations, suggestions for alternatives, recommendations for abridgement.”

And there were plenty of abridgements. Almost all the essays in the book, which was published by Columbia University Press in June, have been tightened up by the trio. They wanted to avoid repetition and the types of dull passages that Carroll said academics tend to include in their essay.

“Boiling down 60 pages (of an essay) to a tight 15 pages can do wonders to keep readers awake, aroused and interest,” he said.

The resulting book features a wide range of essays on evolution, literature and film from the last 35 years, as well as two of Darwin’s essays originally published in the 19th century and three new pieces – two of which were collaborative works by Carroll and Gottschall and their psychologist colleagues John Johnson and Dan Kruger.

The first volume of The Evolutionary Review debuted in January through publication by SUNY Press. The journal has been well-received, Carroll said. Validation, he said, comes in the form of the talent the second volume has attracted.

The next edition of The Evolutionary Review is due out in March and will be nearly twice the size of the first volume, which consisted primarily of roughly 4,000-word independent essays and 2,000-word reviews. The second volume will be similar in content with the addition of longer essay reviews of multiple books in a single field. For example, a distinguished senior neuroscientist has contributed a review of nine books on “affective and social neuroscience,” Carroll said. The model for the essay reviews in the journal’s second volume are based on those in The New York Review of Books.

“We also relaxed the tight word limit some on independent essays, keeping them tight in style, but allowing people more space when they really had the amplitude of subject to warrant it – so long as the pace remains brisk,” he said. “So we’re combining quick, vigorous prose with scholarly depth. It’s going to be a really fine volume.”

For Carroll’s next book, “Reading Human Nature,” to be published by SUNY Press, he’ll continue to showcase the results of his literary Darwinism studies. The book will contain his theoretical essays, empirical research, surveys of intellectual history and interpretive criticisms of specific literary works, including “The Picture of Dorian Gray, Wuthering Heights,” “The Mayor of Casterbridge” and “Hamlet.”