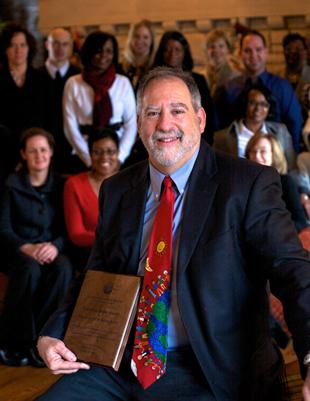 Marvin Berkowitz, the Sanford N. McDonnell Endowed Professor of Education at the University of Missouri–St. Louis, received the Good Work Award from the Association for Moral Education last month during the nonprofit organization’s annual International Conference in St. Louis. He was given the 2010 award for his work with the Leadership Academy for Character Education at UMSL.

“Receiving the Good Work Award from the AME is so meaningful to me in two key ways,” said Berkowitz, who has spent the better part of his life researching and educating others about the importance of character education. “First, the AME is my ‘home’ scholarly community – one to which I have belonged for over three decades – and its members are some of my closest friends and colleagues. Second, it honors the core of why I do what I do – trying to do good work in the world to make the world a better place.”

Berkowitz, an internationally known scholar, founded the Center for Character and Citizenship in the College of Education at UMSL with Wolfgang Althof, the Teresa M. Fischer Endowed Professor of Citizenship Education in 2006. Through the center, he offers the Leadership Academy for Character Education. LACE is a training program for administrators and educators to learn how to optimally foster the development of character in students while still supporting high quality academic instruction.

In addition to running the leadership academy, Berkowitz has written more than 70 articles, book chapters and reports on character education and the leadership academy. His 2005 book, “Parenting for Good: Real World Advice for Parents from the Character Columns of Dr. Marvin W. Berkowitz,” is a collection of 50 newspaper columns written by Berkowitz over four years for the Topeka (Kansas) Capital-Journal. The enlightening and often humorous columns are filled with insight, advice and practical strategies about children and their character.

The Good Work Award is given annually by the Association for Moral Education to recognize outstanding examples of moral educational practice. The AME was founded in 1976 to provide an interdisciplinary forum for professionals interested in the moral dimensions of educational theory and practice.