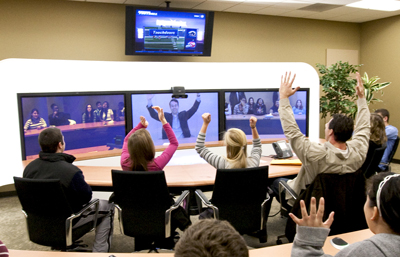 The longstanding “I-70 rivalry” between Missouri’s two cities with NFL teams expanded this week with a virtual, NFL-themed video game. The event, Financial Football Show-Me Showdown, was hosted by the Center for Entrepreneurship and Economic Education at the University of Missouri–St. Louis.

Grant Black, director of the Center for Entrepreneurship and Economic Education at UMSL, said the event is geared toward promoting financial education.

“During the interactive game, each team of students answers financial questions that allow them to move down a simulated football field and score touchdowns,” Black said. “Although our team lost eight to seven, our students answered a number of questions and showed their strong financial knowledge.”

“This is a great way to keep us interested in financial and relate it to something we enjoy like video games. Making it fun and competitive was really cool,” he said.