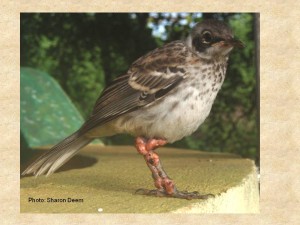 Juvenile Galapagos mockingbird with lesions on legs caused by avian pox. UMSL biologists helped determine the year the pox hit the Galapagos Islands, which will help in further understanding the disease.

University of Missouri–St. Louis biologists Patricia Parker and Robert Ricklefs and a slew of other scientists have pinpointed 1898 as the year the avipoxvirus or avian pox hit the Galapagos Islands and started infecting their birds. This discovery is vital to understanding avian diseases that affect today’s Galapagos birds, according to the researchers.

The scientists’ paper on the subject, “110 Years of Avipoxvirus on the Galapagos Islands,” was published today in PLoS ONE, an international, peer-reviewed, online science publication.

The group – consisting of researchers from across the United States and the Galapagos – examined birds collected in the Galapagos Islands between 1891 and 1906 that are currently held at the California Academy of Sciences in San Francisco and the Zoologische Staatssammlung in Munich. This included 3,973 specimens representing species from two well-studied families of endemic passerine birds: finches and mockingbirds. Passerines include more than half of all bird species.

According to the paper, “The role of disease in regulating populations is controversial, partly owing to the absence of good disease records in historic wildlife populations.”

Parker, lead author of the paper, said these new approaches hope to change that.

“The combination of an extensive museum collection and modern genetics and histology have allowed us to home in on the arrival date of an important virus that threatens today’s populations of unique birds,” said Parker, the Des Lee Professor of Zoological Studies and chairwoman of the Department of Biology at UMSL. “We are all excited to not only have the arrival date estimate, but to have important insights into the role that humans have played (and still play) in spreading pathogens like this virus.

Parker and her colleagues explained in their paper that, “While there have been no known extinctions of bird species on the Galapagos Islands, the population (island) level extinction rate is approximately 100 times higher since human colonization than before, estimated from analysis of subfossil remains.”

They maintain the history of avipoxvirus in wild bird populations on the Galapagos is important in order to understand its role in this accelerated population-level extinction.

The data show that avipoxvirus was present 64 years after Charles Darwin collected specimens in the Galapagos Islands.

Parker said that shortly after its arrival, the virus was much more likely to be found on human-inhabited islands, suggesting that humans inadvertently helped it spread.

“Having this awareness can help the development of protective measures,” she said.