‘Stop Kiss’ to be performed at UMSL 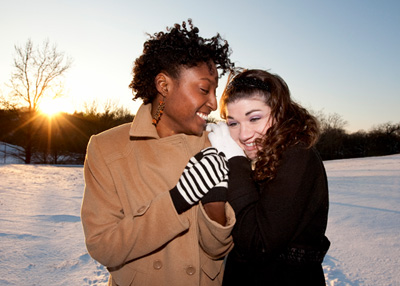 UMSL students Vanika Spencer (left, as Sara) and Ashley Bauman (as Callie) will perform “Stop Kiss” Feb. 3-12 at the Touhill.

Diana Son’s award-winning play “Stop Kiss” will be staged by the Department of Theatre, Dance and Media Studies at the University of Missouri–St. Louis Feb. 3-6 and Feb. 10-12 in the E. Desmond and Mary Ann Lee Theater at the Blanche M. Touhill Performing Arts Center. Tickets are $3 to $10.

Their relationship evolves into an unexpected romantic attraction to each other that is disrupted by a sudden act of homophobic violence. Ultimately, “Stop Kiss” is a moving exploration of friendship, love, violence and devotion.

First produced in New York City in 1998, “Stop Kiss” has received numerous awards, including an Obie Award (the Village Voice’s theater awards for off-Broadway and off-off-Broadway productions) and the Gay & Lesbian Alliance Against Defamation Media Award for Best Production. It was included in top 10 play lists by The New York Times, New York magazine, Newsday and the New York Daily News.

“Stop Kiss” is directed by Tlaloc Rivas, assistant professor of theatre at UMSL. UMSL students and faculty serve as the play’s cast, crew and production team.

“Stop Kiss” contains adult language and subject matter and may be inappropriate for younger audiences.