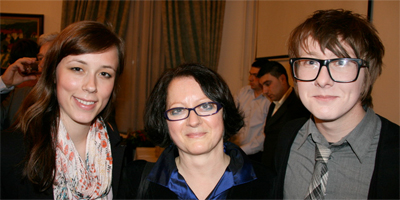 UMSL students Ivana Aleksic (left) and Joshua Lassing were the first to participate in an exchange program with the University of Sarajevo in Bosnia-Herzegovina. Rita Csapo-Sweet, associate professor of media studies at UMSL, helped facilitate the partnership between universities. They met up in May at the University of Sarajevo, which honored UMSL and Csapo-Sweet with an award for the exchange program.

Ivana Aleksic, a Bosnian refugee, moved with her family to St. Louis in 1996. She quickly adapted to American culture. But for years, she wanted to reconnect with her roots. That opportunity came early last year through an exchange program at the University of Missouri–St. Louis.

Aleksic, a senior majoring in public policy and administration at UMSL, spent five months early last year studying at the University of Sarajevo, one of two universities UMSL has student-faculty exchange agreements with in Bosnia-Herzegovina. The other is the University of Tuzla.

The south St. Louis County resident wanted to learn more about her home country’s culture, sharpen her mother tongue and, most importantly, meet her family members living in Bosnia-Herzegovina.

“My time in Sarajevo was the most rewarding five months of my life,” said Aleksic, 21. “I learned more about myself in those five months than I did in the previous 20 years of my life.”

Rita Csapo-Sweet, associate professor of media studies at UMSL, can relate. Working with the Center for International Studies at UMSL, she facilitated the partnership between the Bosnian universities and UMSL.

Csapo-Sweet grew up a first-generation Hungarian-American; her parents came to the United States after World War II. Because of her ethnic background, she said she felt a little out of place while growing up.

“It was not until I spent a year studying at the Royal Academy of Fine Art in Budapest in 1973 that I understood what my roots were,” Csapo-Sweet said. “That year abroad completely changed my life both personally and professionally.”

The partnership with the Bosnian universities evolved out of Csapo-Sweet’s curatorial work for the St. Louis International Film Festival. She met director Bosnian Almir Sahinovic six years ago when his film screened at the festival. He immediately understood her vision of bringing Bosnian students to St. Louis, home to one of the world’s largest Bosnian communities outside of Bosnia-Herzegovina.

Two months later, Csapo-Sweet found herself in Sarajevo meeting Lejla Panjeta, Sahinovic’s film production partner. Panjeta, then the expert advisor for culture to the president of Bosnia-Herzegovina, had ties to the University of Sarajevo and Tuzla and helped expedite the partnerships.

By 2007, UMSL Chancellor Tom George had signed the student-faculty exchange agreement with the universities, and by January 2010, UMSL students were taking classes in Sarajevo.

In May, the University of Sarajevo celebrated the 60th anniversary of its founding by honoring some of the most prominent universities in the world with which they have partnerships. UMSL was the lone North American university recognized at the event.

Aleksic and Joshua Lassing, a senior majoring in media studies at UMSL, were the first two students to study abroad through the young program.

While abroad, Lassing studied film with director Aida Begic, whose movie “Snow” won Grand Prize at the 2008 International Critic’s Week, a parallel competition to the Cannes Film Festival in France. And Aleksic worked as an intern for two months at the Public Administration Reform Coordinator’s Office.

Aleksic said her internship at PARCO gave her glimpse at how much public administration needs to be reformed in Bosnia-Herzegovina and how it should function.

“My coworkers were young and represented all three constituent peoples of Bosnia (Bosniak, Serb and Croat),” she said. “It was enriching to be surrounded by a diverse group of people. By working at PARCO, I got to see democracy in action in a country torn by ethnic and religious tensions.”

Aleksic is scheduled to graduate in May from UMSL. She plans to continue working at Akano Law Offices, an immigration law firm based in Rock Hill, Mo., while applying to graduate schools. She aspires to someday become an immigration policy maker.

The exchange program with the Bosnian universities, meanwhile, will continue to grow, Csapo-Sweet said. She anticipates students from the universities of Sarajevo and Tuzla will spend their first semester at UMSL during the 2011-12 academic year.

There also will be more faculty exchanges. So far, they’ve included Csapo-Sweet giving guest lectures in Bosnia-Herzegovina and Lejla Panjeta doing the same at UMSL.

Other potential collaborations down the road could materialize between the universities’ art, dance, music and nursing programs, Csapo-Sweet said. And the Department of Theatre, Dance and Media Studies could develop distance learning courses to be taught via Internet, she added.