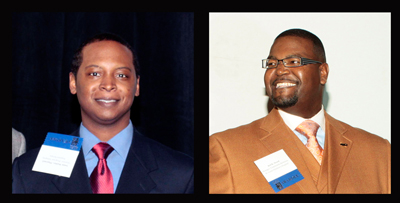 University of Missouri–St. Louis alumni Isaac Butler and Kel Ward received the Salute to Young Leaders award last week from the St. Louis American Foundation. The inaugural award was presented to 20 outstanding African American professionals, 40 years of age or younger, who have shown commitment, compassion and generosity and are making a positive impact in the community.

“These individuals are the newsmakers of the future,” said Donald M. Suggs, president of the St. Louis American Foundation and publisher of The St. Louis American newspaper. “They are going above and beyond in both their professional performance and community involvement.”

“I am motivated by an obligation to serve and an understanding that life is not about what I can do for myself. Purpose and meaning is found in what you can do for others,” Butler told The St. Louis American.

In addition to his work at Express Scripts, he co-founded and continues to directs the BESt* Pharmacy Summer Institute, an academic program designed to increase the diversity and number of pharmacists in the region. The interactive summer program helps prepare minority high school students for success in pharmacy schools and careers.

Ward said he never envisioned himself working in health care, but truly believes this is the best job he’s ever had and enjoys walking into the hospital each day.

“I have a director, vice president, president and hospital foundation who ‘get it.’ What I mean by that is, they understand and are sensitive to the complexity and many needs of our community, and in many cases open and willing to try to seek solutions along with resources in order to address those needs,” he said in an interview with The St. Louis American.

The awards were presented Thursday evening during a reception in the Starlight Room at the Chase Park Plaza in St. Louis. Visit stlamerican.com to read more about the recipients and the award.