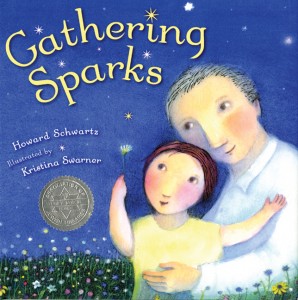 "Gathering Sparks" by Howard Schwartz, professor emeritus of English at UMSL, received a Sydney Taylor Book Award and was featured in the St. Louis Jewish Light.

The St. Louis Jewish Light calls “Gathering Sparks” “absolutely terrific” and gives it high marks for storytelling. The writer telling the story is noted folklorist and poet Howard Schwartz, professor emeritus of English at the University of Missouri–St. Louis.

“Gathering Sparks,” Schwartz’s 12th children’s book, is about a grandfather’s lesson for his grandchild on the centuries-old concept of tikkun olam, which is Hebrew for “repairing the world.”

According to the St. Louis Jewish Light article, “Schwartz deploys his considerable skills as a master-storyteller in ‘Gathering Sparks,’ which begins with a beautifully depicted visit by a grandfather to his grandson.”

Released in August by Roaring Book Press (an imprint of Macmillan Children’s Publishing), the book was recently named a Sydney Taylor Book Award winner by the Association of Jewish Libraries.

Kristina Swarner illustrates “Gathering Sparks.” The Chicago-based artist has worked with Schwartz before, illustrating his book “Before You Were Born.”