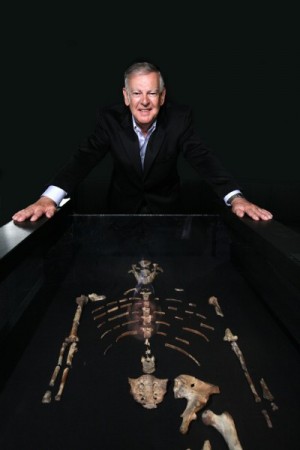 In 1974, Paleontologist Donald Johanson discovered Lucy, then considered to be the oldest found hominid fossil.

Donald Johanson and Tom Gray had just concluded a long, hot November morning of mapping and surveying for fossils near the village of Hadar, Ethiopia. En route back to their Land Rover, the paleontologists detoured through a gully where something caught Johanson’s eye. It turned out to be a right proximal ulna (forearm bone) – the first piece of what after two weeks of excavating, screening and sorting would become 40 percent of a single female hominid skeleton.

And not just any skeleton.

Dated to just under 3.2 million years old, the fossil known as “Lucy” was considered the oldest hominid skeleton ever found at the time of its 1974 discovery.

Johanson will discuss his famous find during the University of Missouri­–St. Louis’ Big History Lecture “Lucy’s Legacy: Our African Origins.” The free lecture will begin at 7:30 p.m. April 25 in the auditorium at the J.C. Penney Conference Center at UMSL.

Johanson is the Virginia M. Ullman Chair in Human Origins and the director of the Institute of Human Origins at Arizona State University in Tempe. The fossil of the young female he discovered more than 35 years ago was assigned to the species Australopithecus afarensis. Lucy picked up her nickname from the Beatles song “Lucy in the Sky with Diamonds,” which was in heavy rotation at Johanson’s camp the night the fossil was found.

The Big History Lecture is sponsored by UMSL’s Department of History and the College of Arts and Sciences. UMSL is one of only a handful of universities to offer a course on big history. Taught by Kevin Fernlund, professor of history and education, Big History: From the Big Bang to the Blackberry gives a 13.7 billion-year overview of Earth’s history including its origins, the emergence of human beings, the creation of complex societies and the impact those societies have on the environment and will have on the future of the planet.

The J.C. Penney Conference Center is on the North Campus at UMSL, 1 University Blvd. in St. Louis County (63121).