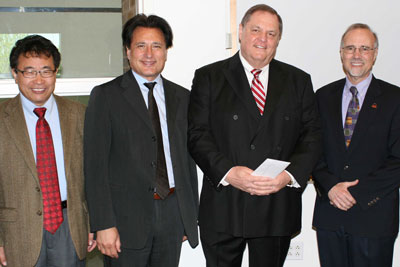 George Gokel (third from left) is a distinguished professor of science at UMSL and recipient of the 2011 Chancellor’s Award for Excellence in Research and Creativity. He was presented the award by Jimmy Liu (far left), director of the Center for Nanoscience at UMSL; Nasser Arashadi (second from left), vice provost for research at UMSL; and UMSL Chancellor Tom George (far right).

George Gokel, associate director of the Center for Nanoscience and distinguished professor of science at the University of Missouri–St. Louis, received the 2011 Chancellor’s Award for Excellence in Research and Creativity.

“Your commitment and dedication to your students and the university through your research is well documented and proves your eminence in your field,” George said.

The award was set up to honor a full-time faculty member who has demonstrated superior research or creative contributions to the university. It includes a cash stipend to be presented as part of the State of the University Address in September.

Gokel is interested in new, synthetic compounds that can form tunnel-like pathways (channels) in membranes – the barriers that surround cells. These channels typically help nutrients enter and waste products exit cells. His recent work is focused on creating pathways that will assist the entry of drugs into cells.

Gokel has graduated 40 doctoral and master students, he has supervised more than 30 post-doctoral fellows and about that number of undergraduates have passed through his lab. Many of those undergraduates co-authored papers. He has published more than 400 peer-reviewed papers, authored, co-authored or edited 10 books and is named as an inventor on more than 15 patents. He co-founded two journals and a series of monographs. He has been invited to present lectures on his work more than 350 times in the United States, Canada, Europe and Asia. He has supported his research effort continuously for more than 30 years with grants from the National Institutes of Health, National Science Foundation and the Petroleum Research Fund, as well as numerous industrial contracts.

Gokel was appreciative and said he would set up a scholarship at UMSL.

“I am very honored by this award,” he said. “UMSL is a tremendous place for research. The caliber of students and my colleagues continues to inspire me.”