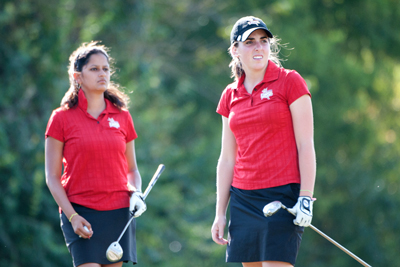 The University of Missouri–St. Louis women’s golf team has six members, but those six members call four different countries home. And the team, which members say is more a family than a team, is pretty happy about their performance this season.

“This season was simply amazing,” Coach James Earle said. “We accomplished so many team and individual goals throughout both the fall and the spring seasons, including five team titles and a second straight bid to the NCAA Super Regional Championship.”

The team finished sixth at the championship, which was held in Belle Vernon, Pa. May 1-3. And the individual play of Shwete Galande, a sophomore psychology major at UMSL, earned her a spot at the NCAA Championships, which will be held May 11-14 in Allendale, Mich.

The team is not only known for its success on the greens but also for its international makeup.

“We have four continents represented on the team,” Earle said. “I don’t think many schools can say that about their golf team. But we have come together to represent the university from Spain, India, South Africa and the U.S. to be the best women’s golf team in UMSL history.”

Diversity has been an asset, according to team members.

“We have so many cultures all blended into one,” said Lindsay Kellerman, a junior accounting major at UMSL from Pickneyville, Ill. “We all have to mix and have great chemistry to form a great team.”

And mix they have. Every golfer brings something different to the team.

“We are all highly supportive of each other and work together,” said Chelsea Kellogg, a sophomore nursing major at UMSL from Des Plaines, Ill.

The team is a perfect combination of hard work on the golf course and in the classroom and lots of fun said Clara Vila, a senior psychology major at UMSL from Tarragona, Spain.

In addition to their success at the regional championship, the team had five first-place team victories, including wins in April at the Oak Terrace Spring Invite held in Pana, Ill and the Lewis Aviator Classic held in Lockport, Ill. The team also placed second at the Great Lakes Valley Conference tournament in April, and Shwete Galande, who hails from New Delhi, India, received medalist honors at the event.

Daniela Viotti, a freshman business administration at UMSL from Constantia, South Africa, was the first UMSL women’s golfer to be named the GLVC conference player of the year and the second to be named GLVC freshman of the year. Galande snagged the honor last year.

The players are quick to credit Coach James Earle with their success.

“We have one of the best coaches around,” said Samantha Pelc, a sophomore criminology and criminal justice major at UMSL from Sherman, Ill. “We have a coach that is there for us not only as a mentor and teacher but as someone we can lean on when we have stressors in our lives. Our team is a home away from home.”