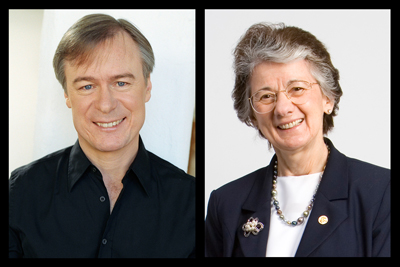 Environmental microbiologist Rita Colwell was the first woman director of the National Science Foundation. St. Louis Symphony Music Director David Robertson also serves as principal guest conductor of the BBC Symphony Orchestra in London. They have attained great prestige within their respected fields. Now both will receive honorary degrees Saturday from the University of Missouri–St. Louis.

Robertson just wrapped his sixth season as music director of the 131-year-old St. Louis Symphony. He’s also held the post of principal guest conductor of the BBC Symphony Orchestra since 2005.

After holding several postings abroad over the last 25 years, Robertson has established himself as one of the most sought-after American conductors. He’s also made numerous recordings and achieved great success on the operatic scene with more than 45 operas in his repertoire.

James Richards, interim dean of the College of Fine Arts and Communication at UMSL, will introduce Robertson at commencement. (Gary Dollar, president and chief operating officer of United Way of Greater St. Louis, will serve as guest speaker.)

Richards said Robertson is credited as a master orchestral and operatic programmer who commands international notice for his compelling, passionate and exhilarating performances. He also pointed out that the St. Louis Symphony music director is a champion of young musicians and has devoted considerable time working with young artists throughout his career.

“We are very proud of the long-standing relationship between the St. Louis Symphony and the University of Missouri–St. Louis,” Richards said. “The orchestra has performed frequently in the Blanche M. Touhill Performing Arts Center, many members of the symphony serve as key adjunct applied faculty in the Department of Music; and the St. Louis Symphony organization is among the co-founding members of the E. Desmond Lee Fine Arts Education Collaborative, one of this campus’s most effective and comprehensive outreach initiatives.”

Rita Colwell served as the 11th director of the National Science Foundation from 1998 to 2004. She is now chairman of Canon US Life Sciences Inc. and Distinguished University Professor at both the University of Maryland at College Park and Johns Hopkins University in Baltimore.

An internationally-respected scientist and educator, Colwell has co-written 16 books and more than 700 scientific publications, and she produced the award-winning film “Invisible Seas.” She’s also worked toward increasing the participation of women and minorities in science and engineering.

Ron Yasbin, dean of the College of Arts and Sciences at UMSL, said, “Dr. Will Carpenter (a fellow with the Academy of Science of St. Louis) and I nominated Dr. Rita Colwell for an honorary degree because of her unique, internationally recognized accomplishments as a scientist, as an administrator and as a role model for helping to bring quality, diversity and inclusion into the STEM (science, technology, engineering and mathematics) disciplines.”

Yasbin will introduce Colwell at commencement. Monsanto Fund President Deborah Patterson, who earned a master’s degree in political science in 1976 from UMSL, will serve as guest speaker.