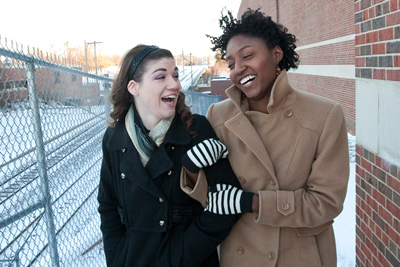 UMSL students Ashley Bauman (left, as Callie) and Vanika Spencer (as Sara) act a scene “Stop Kiss," which was staged in February at the Touhill. The Department of Theatre, Dance and Media Studies at UMSL announced their 2011-12 dance and theater performance schedule.

The Department of Theatre, Dance and Media Studies at the University of Missouri–St. Louis has planned a multifaceted program for its 2011-12 season. UMSL students and faculty and will showcase their dynamic talents in three mainstage plays and two dance concerts at the university’s Blanche M. Touhill Performing Arts Center.

Theater productions will include the staging of a classic magical realism novel, a heartwarming and honest exploration of African American women at the turn of the 20th century and a rip-roaring classical farce from one of the greatest dramatists of all time.

“The 2011-2012 Season represents a vibrant mix of classic storytelling and critically lauded work that help us to take a closer look at the human experience and the issues that are central to our lives today. It is a mix of entertaining and challenging programming that our students and theater majors are eager to explore and share with audiences in St. Louis,” said Tlaloc Rivas, assistant professor of theatre at UMSL.

The season begins with Caridad Svich’s acclaimed adaptation of Isabel Allende’s beloved novel “The House of the Spirits” (Oct. 14-22). It was recently an off-Broadway smash hit that extended several times throughout its run. Set in a fictional Latin American country, ”The House of the Spirits” is a family saga that looks at four generations of political, social and familial upheaval, told through the lens of poetic magical realism. Tlaloc Rivas, assistant professor of theatre at UMSL, will direct. The production will be performed in English with music and songs by Svich.

Students from the Department of Theatre, Dance and Media Studies at UMSL will share the stage with Modern American Dance Company, the resident dance company at UMSL, for their annual fall dance concert, “Sum of Motion” (Nov. 10-12). Rob Scoggins, assistant professor of dance at UMSL, and Todd Weeks, lecturer in dance at UMSL and associate artistic director of MADCO, will direct.

Coinciding with African American History month, UMSL will present “Intimate Apparel” (Jan. 27-Feb. 4) by Pulitzer Prize-winning playwright Lynn Nottage. Set in New York at the turn of the last century, “Intimate Apparel” follows Esther, an African American seamstress, who crafts beautiful lingerie for a range of clients, from the ladies of the Upper East Side, to the prostitutes of the infamous Tenderloin district. With the vivid characters that inhabit the story, Nottage tells a tale of self-discovery, acceptance and independence. Niyi Coker, the E. Desmond Lee Endowed Professor of African/African American Studies at UMSL, will direct.

The season will continue with Ranjit Bolt’s acclaimed adaptation of “Tartuffe” (March 16-24) by Moliere. The religious hypocrite Tartuffe has wormed his way into the once-orderly household and vulnerable heart of substantial merchant Orgon. Under the guise of piety, he looks set to succeed in driving away the son, marrying the daughter, seducing the wife, imprisoning Orgon and leaving the family destitute. Railed against as a sacrilegious outrage by the church, the play was banned from public performance by Louis XIV in 1664. Tlaloc Rivas, assistant professor of theatre at UMSL, will direct.

The season will conclude with the annual spring dance concert, “Sum of Motion” (Apr. 5-7). It will feature performances and choreography by the students from the Department of Theatre, Dance and Media Studies at UMSL, as well as professional guest artists from the St. Louis region and beyond. Rob Scoggins, assistant professor of dance at UMSL, and Todd Weeks, lecturer in dance at UMSL and associate artistic director of MADCO, will direct.

All productions will feature design work by UMSL assistant professors of theater Felia Davenport (costume) and Glen Anderson (scenic and lighting), as well as student designers whose work will complete their degrees for 2012. Davenport’s and Anderson’s work has been critically acclaimed locally and nationally, while at the same time creating and expanding (along with Rivas) a revitalization of the theater program at UMSL.

All performances will take place at the Blanche M. Touhill Performing Arts Center, located on the North Campus at UMSL, 1 University Blvd. in St. Louis County (63121). Free parking is available for all performances. Call 314-516-4850 or e-mail rivast@umsl.edu for all educational inquiries. Call 314-516-4949 or visit touhill.org for tickets and school group sales questions.