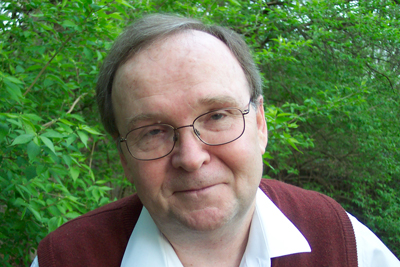 Joseph Carroll, Curators’ Professor of English at the University of Missouri–St. Louis, has devoted nearly 20 years to a movement he created and dubbed “literary Darwinism.” His initially controversial research is now gaining traction within the literary community.

And that’s led to some prolific publishing on Carroll’s behalf. Over the past two years, he has helped create and edit two volumes of The Evolutionary Review journal and had his name attached to a pair of books on the subject of what Science magazine calls the study of “literature through the lens of Darwinian evolution.”

Carroll has another book in the works and he’s working with Patricia Parker, the E. Desmond Lee Endowed Professor of Zoological Studies at UMSL, to develop a conference on evolution in biology, the social sciences and humanities. The conference is scheduled for April with the introduction of a new evolutionary studies program at UMSL to precede it in the fall.

Carroll took a break from that work and preparations for a trip next month to teach a literary Darwinism course in Denmark to discuss his work with UMSL News.

How has the literary Darwinism movement evolved since you first founded it?

In four main ways: (1) it has developed more unified evolutionary explanations for literary works, and along with better explanations, (2) more subtle methods for close analysis; it has (3) incorporated empirical, quantitative methods in its toolkit; and it has (4) taken a leading role in making evolutionary, adaptive sense of the arts and culture. In this fourth development, it has contributed to the process of revising the models of human nature that were produced by early forms of evolutionary psychology.

Why do you feel the application of science to the humanities rubs some scholars the wrong way?

Scholars in the humanities are afraid of losing the sense of legitimacy in the methods in which they’ve been trained. They’re comfortable with those methods, and they don’t want to have to re-train in ways that seem alien and uncongenial to them.

My favorite fantasy is having an interdisciplinary institute in which my colleagues and I can train graduate students. We’d have a curriculum that combined courses in humanities, courses in the evolutionary human sciences and courses in statistics and empirical methods. People with that kind of background would develop humanistic knowledge in ways we can’t even begin to imagine.

Literary scholars have to be sensitive to the emotional and imaginative qualities of literary works – the personal and aesthetic qualities. I suppose some scholars feel that the more objective and scientific they became, the less sensitive they’d become. I don’t think it works that way. I’ve read many books in biology and the social sciences. And in my own mind, my interpretive responses have become steadily richer and more adequate to the demands of literature. Literary scholarship has always required that one balance between personal responsiveness and impersonal explanation. Incorporating scientific methods wouldn’t change that, except for the better. Indulging habitually in flakey forms of explanation has a corrupting influence on the mind and character, so that interpretive sensitivity deteriorates in tandem with explanatory validity.

What about the evolutionary sciences – do researchers from that area focus much on art and the imagination in general?

Hardly at all. Most of the evolutionary social scientists have given the arts a wide miss, either just ignoring them, or explaining them away. That might be changing, at least among the more open-minded evolutionists. “Gene-culture co-evolution” has been rapidly gaining prominence as a research area. And there are quite a few humanists now who have the kind of evolutionary knowledge that will enable them to contribute to this research in concrete ways.

I read in an issue of Science magazine that you describe your 1995 book “Evolution and Literary Theory” as your “big, baggy monster.” What do you mean by that?

I mean that I threw into it pretty much everything I had learned over a 20-year span. Inside every fat, loosely organized book, there is a slim, trim, highly focused argument yearning to be free. I feel for the skinny guy in this case. He didn’t stand a chance.

Tell me about your newest book, “Reading Human Nature.” What kind of readers would enjoy the book?

“Reading Human Nature” falls neatly into four main sections: Darwinist literary theory; essays in practical literary criticism; examples of empirical, quantitative research; and intellectual history from Darwin to the present. That covers the ground for the kinds of things being done in this field now.

“Reading Human Nature” contains full-bodied essays on “Hamlet,” “Wuthering Heights,” “The Picture of Dorian Gray” and “The Mayor of Casterbridge.” Some of the literary Darwinists think practical criticism is a trivial thing, not a contribution to empirical knowledge or basic theory. But many humanists have claimed that literary Darwinism will stand or fall by the quality of the practical criticism it can produce. I don’t think that’s quite true, but it’s true enough so that I’m glad every time I write a critical essay that vindicates the Darwinist claim that an evolutionary perspective can produce new knowledge that is adequate to the challenge of great literature.

The one older piece of work that I include in “Reading Human Nature” is the long introduction to my edition of Darwin’s “On the Origin of Species.” Around the turn of the century, I spent three years concentrating on that project. I work against the grain in contemporary academic history of science. Folks who write for (the journal) Isis mostly subscribe to the idea that science is just another form of fiction. They also participate in the contemporary humanist ethos that disparages the idea of “genius”; they concentrate hard on the clay feet of great scientists. I argue that Darwin got it mostly right – hence his massive influence on biology unto the present day. I identify one crucial component of his genius as an instinct for getting at the truth. And I give due acknowledgement to his fine personal qualities: modesty, integrity, warmth and generosity.

Who would enjoy the book? Well, the usual suspects, of course: all my pals in Darwinist literary study and possibly some biologists, anthropologists and psychologists who are following developments in evolutionary studies in the humanities. The big question is just how far the book can go in appealing to generally educated readers—the kind of people who regularly buy books by good popular science writers such as Nicholas Wade, Matt Ridley, Daniel Goleman, Steven Pinker and Richard Dawkins. My fondest hope is to appeal to this particular audience. I have a good friend who writes excellent popular books for a generally educated audience. She tells me my paragraphs are too long and dense and that I presuppose a lot of insider information. I hope she’s sadly deluded. I’m afraid she’s not.

What about the annual journal you co-edit with Alice Andrews, “The Evolutionary Review”? How is the second volume different from the inaugural volume?

It’s about two-thirds the size of the first volume, and it has a new feature: big, long essay reviews of multiple books on single topics. For instance, there has been an explosion of books on evolutionary studies of religion. Ellen Dissanayake takes on nine such books, some of them edited collections, and succeeds in commenting on every item, including every essay in each collection. David Bjorklund, a leading developmental psychologist, reviews two important new books in his field and gives a retrospective survey of the field. Jaak Panksepp, a founder of affective neuroscience, reviews nine books in that field. I review three books on gene-culture co-evolution and summarize the development of the evolutionary social sciences over the past forty years. Aaron Kozbelt surveys multiple books in neuroaesthetics. The distinguished evolutionary biologist Francisco Ayala surveys recent books in the history of Darwinism. If you want to know most of what’s going on in evolutionary studies at the present time, this is the best place to find out.

Volume two, like volume one, contains independent essays and short reviews. Robin Headlam Wells has a splendid piece on the ethics of the Pentateuch. Robin is a Shakespeare scholar and an especially accomplished prose stylist. Peter Kjaergaard, a Danish paleontologist, has a very witty piece on fossil hype. And there are other fun pieces – Kevin Scott Baldwin on dung beetles and religion (you’d be surprised), Marnia Robinson on addiction to porn, Anne Campbell on the evolutionary logic at work in movies about mean teenage girls and John Johnson on vampire movies. Baba Brinkman, a professional evolutionary rap artist, has a witty essay on rap and Gad Saad gets down and dirty with popular lyrics. There are also several essays on poetry. Blakey Vermeule has a humorous dialogue on evolutionary approaches to fiction.

The second volume was my swan song as co-editor. I had to decide whether to spend most of my free time on the journal or start my next book. The book won. Alice now has a group of co-editors helping her with the journal. Long may it flourish!

Tell me about the graduate course you’ll be teaching throughout July in Denmark.

A Danish doctoral student, Mathias Clasen, was the moving force behind the course. Aarhus University has developed a program for intensive summer courses for international graduate students. Mathias has been publishing high-quality essays on horror fiction from a Darwinist angle. He suggested I propose a course based on the anthology “Evolution, Literature, and Film” (co-edited by Carroll).

This is a modified version of a course I taught last fall in the Pierre Laclede Honors College at UMSL. As in the honors course, at Aarhus we’ll read the whole anthology – some 500 pages –and supplement it with stories, a play (“Hamlet”), a movie (“Citizen Kane”) and a few more essays. All this in a single month! Not for the faint-hearted. Fortunately, Denmark is mild in the summer. Students won’t be wilting in St. Louis heat.

The most enticing thing about the course, for me, is that all the students have signed up because they are particularly interested in this subject. Presumably, they will come well prepared and committed. I’m looking forward to meeting them. I’m hoping to learn from them. I had planned to spend the summer working on my new book, but the book is designed to be conversational – it’s aimed at an audience of generally educated readers, not academic literary specialists. Having good conversation with interested students should give me a boost in writing the book. I have the fall semester off here, thanks to the University of Missouri Research Board, and I’m hoping the conversations from the seminar will flow into the stream of the book.