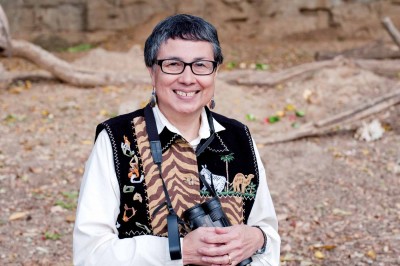 Zuleyma Tang-Martinez, professor of biology, has had a few exciting weeks. In July she was named a fellow in the Animal Behavior Society and this week was named a UMSL Founders Professor.

Zuleyma Tang-Martinez, professor of biology at the University of Missouri–St. Louis, has two more accolades to add to an impressive list. Because of her extensive research on the social behavior, chemical communication and kin recognition mechanisms of rodents she recently was named a fellow in the Animal Behavior Society. She has also been named a Founders Professor, a new designation for retired professors with a record of meritorious contributions to the university.

The ABS distinction is given to those members of the society who have made distinguished contributions to the field. No more than five percent of the ABS membership can be fellows. Last year Tang-Martinez was recognized by the ABS with the Quest Award for her pioneering work with rodent behavior, aspects of which are now used widely by many in the field.

“It says to me the ABS and my fellow animal behaviorists really value my contributions,” said Tang-Martinez. This latest recognition was presented at a joint meeting last month of the ABS and the International Ethological Conference.

In recent years she has worked on the behavioral ecology of other mammals, reptiles and the poisonous brown recluse spider.

The soft-spoken zoologist with a fondness for animals that don’t show up on a list of everyone’s favorites, has spent most of her professional career at UMSL. She earned masters and doctoral degrees from the University of California, Berkeley and arrived at UMSL in 1976 following two years of post-doctoral work at the University of British Columbia, Canada.

The Founders Professor designation recognizes Tang-Martinez’s achievements in the field and her service to the university. The new appointment is given to faculty who have held the rank of associate professor or professor for at least five years and whose contributions to the university are considered meritorious. Salary for the part-time position is limited to no more than 25 percent of the final year salary before retirement. The appointment is not to exceed three years.

Tang-Martinez’s official retirement date is Sept. 1, but the new appointment means she won’t be moving out of the biology offices any time soon.

“I wasn’t sure about retiring, but this new appointment allows me to have a limited teaching load and be involved in certain service activities on campus, including my favorite: serving on the search committee that will select my replacement,” she said. “I’m also on the editorial board for a book series on animal behavior aimed at undergraduates and the informed general public. And, of course, I also plan to do some of the things I’ve been putting off for years.”

Like her list of accomplishments before retirement, this one is growing long –photography, painting, more travel including to her native Venezuela, volunteering more extensively with the Alzheimer’s Association, continuing her long history of service on the ABS’s Diversity and Latin American Affairs committees and auditing courses that interest her outside of biology.