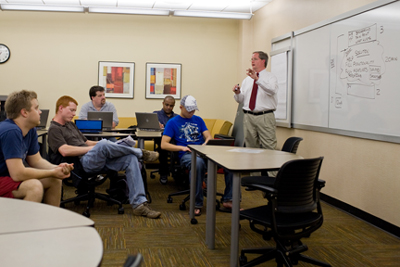 The International Business program at the University of Missouri–St. Louis is ranked among the top 20 best undergraduate international business programs for the ninth consecutive year by U.S. News & World Report.

The program is ranked 15th in the magazine’s 2012 “America’s Best Colleges” guidebook, released today (Sept. 13). UMSL’s program, one of only two ranked in Missouri, is the highest ranked international business program in the state. St. Louis University tied for 16th with Florida International University in Tallahassee.

Joseph Rottman, director of the International Business Institute at UMSL, said the ranking is continued proof of the program’s excellence.

“Our outstanding faculty and advisory board continue to improve an already excellent program,” Rottman said. “To be ranked 15th in the country and to be in the top 20 for nine consecutive years shows what a great international business program UMSL has.”

College of Business Administration Dean Keith Womer said the program is great because of the people.

“Our faculty and students are the reason the International Business program is so successful,” Womer said. “We have faculty who are leaders in their fields, many of which are leading the way in global business research and advancement. Our students are among the brightest around, many of which have gone on to exciting careers at top companies both nationally and internationally. And the program enjoys amazing support from key members of the St Louis business community.”

Building on the long-running success of the undergraduate program, the college launched the International Master’s of Business Administration program in 2005. The International MBA program created partnerships with international universities in China, Japan, India, France, Mexico, Austria and Taiwan. Students enrolled in the two-year graduate program spend the first year studying abroad, followed by a summer internship and before returning to UMSL for a year.