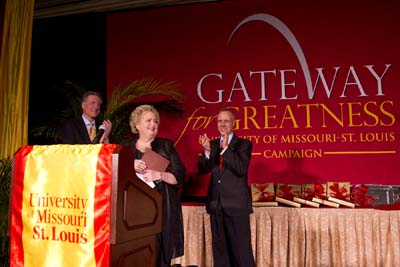 Kathy Weinman receives a standing ovation for her passion and commitment to abused children at UMSL's Founders Dinner Sept. 15. She received the E. Desmond and Mary Ann Lee Medal for Philanthropy from the university. Martin Leifeld (left), vice chancellor for University Advancement and Chancellor Tom George presented the medal.

The University of Missouri–St. Louis had a lot to celebrate Sept. 15 at the Ritz Carlton St. Louis in Clayton, Mo. A record 800 people were on hand to help. UMSL’s 20th annual Founders Dinner recognized its early leaders, outstanding alumni, faculty and staff. The event also gave the university an opportunity to thank its growing list of donors.

Martin Leifeld, vice chancellor for University Advancement, announced the Gateway for Greatness campaign was inching closer to its goal of $150,000,000 by June of 2012. Thursday night’s total stood at $128,965,436.54. “Every penny counts,” Leifeld told the crowd.

Philanthropist Kathy J. Weinman received the E. Desmond and Mary Ann Lee Medal for Philanthropy. The medal, which honors the Lees for their philanthropic support, is given to an individual who embodies their extraordinary spirit of giving. Weinman received the medal for her unfailing advocacy for abused children. In 1997, with a gift of $3 million to UMSL, Weinman built and opened the Kathy J. Weinman Children’s Advocacy Centre on its South Campus. The child-friendly center has helped thousands of abused children and their families heal. Her other gifts to the university bring the total to $3.9 million.