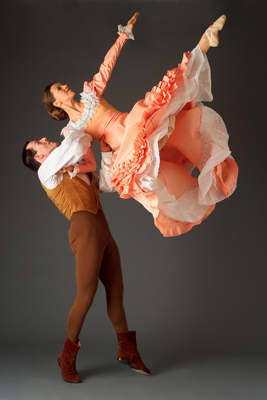 The Martha Graham Dance Company will perform at 8 p.m. Oct. 14 and 2 and 8 p.m. Oct. 15 in the Anheuser-Busch Performance Hall at the Touhill.

Martha Graham, the company’s namesake and founder, was a legendary performer earning the distinction of “Dancer of the Century” by Time Magazine. The Martha Graham Dance Company program at UMSL will showcase the depth and beauty of Graham’s earth-centered, emotionally acute choreography, including the beloved classic set to Aaron Copland’s transcendent music “Appalachian Spring.” Graham’s undying power to inspire will be spotlighted by the new “Lamentation Variations” – reflections by today’s choreographers on her iconic “Lamentation” solo.

“Graham was the consummate showman,” the Washington Post said. “Her works are brilliantly crafted, and the dance vocabulary she created is unparalleled. And the Graham company has never looked better in it.”

Dance St. Louis and Centene Corporation will present the performance.

Michael Uthoff, artistic and executive director at Dance St. Louis, will host a pre-performance “Speaking of Dance” talk with a representative from the performance dance company. That will begin 45 minutes before show time in the Terrace Lobby at the Touhill. Uthoff will also lead an informal post-show discussion in the Terrae Lobby.