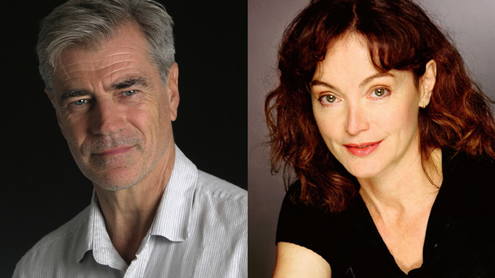 Andre Nerman and Yannick Rocher will perform “An Evening of French Theatre” Nov. 3 at UMSL.

Struggling relationships and scorned lovers will be the focus of two one-act plays in French performed at the University of Missouri–St. Louis.

“An Evening of French Theatre” will feature the plays “La Peur Des Coups” by George Courteline and  “La Voix Humaine” by Jean Cocteacu. The two one-act plays, performed by actors Andre Nerman and Yannick Rocher from the Caravague Theatre Company,  will begin at 6:30 p.m. Nov. 3 in the auditorium at the J.C. Penney Building and Conference Center at UMSL.

The first performance, “La Peur Des Coups,” is the story of a fight between a husband and wife who have just returned home from an evening out during which the violent and overzealous husband accused his wife of flirting with a young handsome man.

In “La Voix Humaine,” a young woman has been interrupted during a telephone call from her lover of five years. He has abandoned her and is to marry another woman the following day. This is the last time they will speak to each other, but their connection is interrupted several times during the agonizing conversation.

Andre Nerman, a French actor, singer and director, has appeared in numerous plays, television and film. In 2007, he founded the Caravague Theatre Company where he continues to tour and perform around the world.

Yannick Rocher is a French trained actress and dancer. She’s performed on stage in Paris, London and across the United States.

Tickets for “An Evening of French Theatre” are $8 and $5 for students.