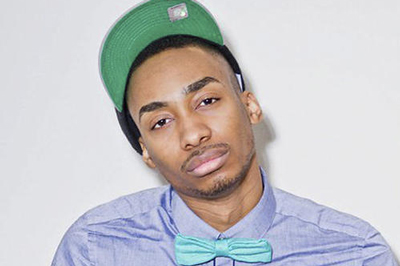 University of Missouri–St. Louis alumnus Richard Williams is making quite a name for himself as rapper. And that name is  “Prince Ea.”

As Prince Ea, Williams takes on a nerd persona. He claims his biggest influence is the television character Steven Urkel from “Family Matters” and has a penchant for calculators and pocket protectors. Prince Ea raps about politics, “school being cool” and “the unification of the human species.”

Williams, who earned a bachelor’s degree in anthropology in 2011 from UMSL, wants to  “Make ‘SMART’ Cool,” which also is the name of a movement he is leading.

Born and raised in north St. Louis, Williams  was recently featured in the St. Louis Post-Dispatch and the Riverfront Times.

The name Prince Ea is a reference to the Prince of Earth in ancient Sumerian scripture; Williams adopted the moniker as a name to inspire others, according to the RFT.

“I felt like it was my duty to educate and enlighten through this vehicle called hip-hop,” he told the St. Louis publication. “It’s a language that’s understood by a certain subculture, and I felt like that was the subculture that needed these messages the most.”

In 2009, Williams was the winner of Vibe magazine’s “VibeVerses” competition, and he also claims the distinction of being the first rapper to be featured on the pages of Discover Magazine. The latter wrote, “This prince may be the king of brainy hip-hop.”

As if all of that weren’t enough testament to his rise as a rapper, Prince Ea was also among several UMSL alumni chosen as “Best of St. Louis” in 2011 by the Riverfront Times. He was picked as “Best Local Act Gone National.”