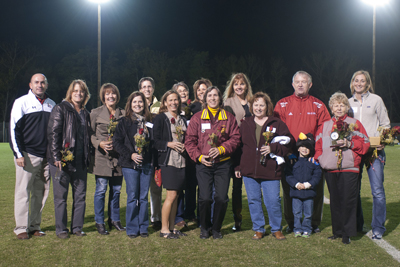 Friday night (Oct. 14) during halftime of the men’s soccer game against Kentucky Wesleyan College (Owensboro), 30 years of women’s soccer at UMSL was celebrated with Berres, Hudson and several members of that inaugural 1981 team in attendance.

UMSL’s second full-time women’s soccer coach, Beth Goetz, also returned to be honored for her contribution to the program, which owns an all-time record of 336-221-7 and has produced 15 all-Americans and eight UMSL Sports Hall of Famers.