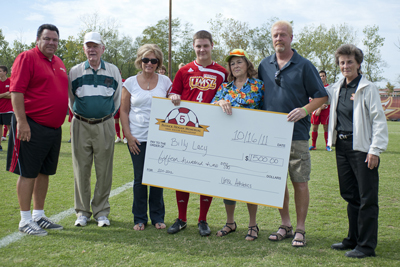 Men’s soccer freshman Billy Lacy was named as the first recipient of the Pat Hogan Memorial Scholarship on Sunday (Oct. 16) prior to the University of Missouri–St. Louis Tritons’ contest against the University of Southern Indiana (Vanderburgh County).

Hogan played at UMSL from 1973-76 and was a member of the 1973 NCAA Division II National Championship team, which finished with an 11-0-3 record. During his four-year career, UMSL produced a 34-17-9 record and competed in four NCAA Tournaments. As a senior on the 1976 team, he earned all-region honors after helping the team to a 9-8-1 record and a berth in the NCAA Tournament semifinals.

After being inducted into the 2010 UMSL Sports Hall of Fame, Hogan talked about his desire to create a scholarship opportunity for a player like himself – a student with the love and passion for soccer and the desire to play at the college level. Hogan lost a courageous battle with amyotrophic lateral sclerosis, commonly referred to as Lou Gehrig’s disease, in March 2010. In his honor, an endowed scholarship was created with Lacy being named the first recipient.

Julie Hogan, Pat’s wife, along with his parents Jack and Lois and brother Mike, presented the $1,500 scholarship to Lacy.