UMSL goes all out for Month of Giving 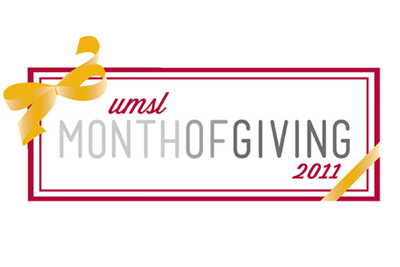 Patricia Zahn raised more than a few eyebrows when she set the total Month of Giving goal at $75,000, nearly $10,000 more than last year. What the faculty, students and staff at the University of Missouri–St. Louis proved during October, was that her belief in UMSL’s philanthropic spirit was right on.

The final number exceeded all goals set. A total of $90,131.25 was raised through the Employee Charitable Giving Campaign and student philanthropy on campus. More than $73,000 was raised for the United Way and Community Health Charities. And UMSL students raised $17,104.25 for numerous community organizations.

“This has been a fantastic month of giving,” said Zahn, manager of UMSL’s Community Outreach and Engagement and director of the Des Lee Collaborative Vision. “This was definitely a team effort with support from our administration and several colleagues throughout the UMSL community.”

“Our campus community has once again demonstrated their extraordinary investment in the community,” George said. “In addition to this year’s record- breaking monetary contributions, you’ll find many of our faculty, students and staff giving of their time and talents, collaborating with hundreds of institutions and thousands of individuals all year long. It is who we are and what we do.”