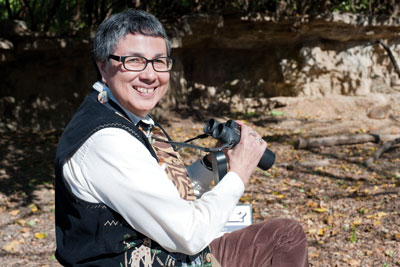 UMSL animal behaviorist Zuleyma Tang-Martinez was named one of the top eight Hispanic academics in the nation.

Animal behaviorist Zuleyma Tang-Martinez has been recognized for her work many times during her storied career. Her latest accolade names her as one of the top eight most influential academic Hispanics in the nation.

Tang-Martinez earned the distinction from Hispanic Business magazine, which highlighted her attempts to increase Latino participation in science and in her professional society, the Animal Behavior Society.

The Founders Professor of Biology at the University of Missouri–St. Louis said she is surprised and deeply honored by this recognition.

“I continue to be very involved with ABS’s efforts to increase diversity in our science. I am particularly active with the ABS Latin American Affairs Committee, the diversity committee, which I chair, and an ad hoc committee that will be submitting a grant proposal to the National Science Foundation’s new Broadening Participation Initiative,” Tang-Martinez said. “At UMSL, I am trying to adjust to being partially retired, writing scientific papers and working on a number of other scientific projects, including planning new research. I also continue my involvement in diversity-related issues on campus.”

Tang-Martinez, born in Venezuela, received her PhD in zoology from the University of California at Berkeley in 1974. She was the first Latin American president of the international Animal Behavior Society, and was honored as the first woman and first Hispanic woman to receive tenure and be promoted to full professor in her department at the University of Missouri-St. Louis. She has taught university courses in Mexico and Venezuela, and maintains research partnerships with Venezuela colleagues.