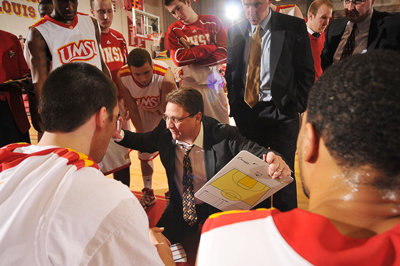 MEN’S BASKETBALL
UMSL opened the home portion of its schedule with a 74-48 victory over the University of Lindenwood–Belleville (Ill.) on Nov. 19. Junior Joshua McCoy led all scorers with 21 points, while the victory also gave UMSL head coach Steve Tappmeyer his 425th career win. The Tritons jumped out to a 20-6 lead in the opening eight and a half minutes before taking a 42-15 lead into halftime. UMSL, which now stands at 1-2 overall, shot 38 percent from the floor and owned a 46-37 rebounding advantage, including a 21-11 edge on the offensive end.