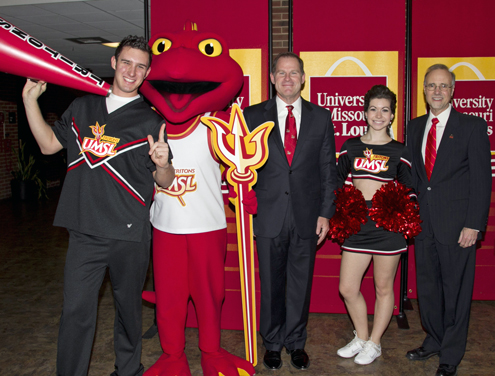 Timothy M. Wolfe, (center) the new UM System president, was welcomed to the UMSL campus by a large crowd this morning including (from left) Christopher David, Louie the Triton, Emily Frenz and Chancellor Tom George. Wolfe will officially start his new duties Feb. 15.

He spoke often about meeting with individuals on the campus, getting to know them and working with them.

“I’m very comfortable in this environment,” Wolfe told the crowd. “When you get bright people in a room, somehow what comes out of the conversation is unique and different than you could do as an individual.”

Wolfe, a high-tech industry executive who grew up in Columbia, Mo., was named president of the system after a nearly yearlong search. He officially starts work Feb. 15. He received a bachelor’s degree in business from the University of Missouri–Columbia. Both of his parents are college professors.

“During the months of interviews and conversations, we have learned that our next president cares deeply about Missouri and about our university,” Erdman said. “He listens and respects the opinions of others and values their knowledge. He respects the unique role of each of our campuses.”

Most recently, Wolfe, 53, held the position of president of the Americas at Novell, a leading provider of infrastructure software. He spent 20 years with IBM, working his way up from sales to vice president and general manager of the global distribution sector.

Wolfe received a big round of applause when he mentioned Benton and Stadler halls, the long-delayed renovation project for UMSL’s 40-year-old science complex.

“I commit to you to spend quality time on this campus with students, faculty, staff and alumni,” he said. “Learning means spending more time listening than talking.”

He praised UMSL for its “proud tradition of educating St. Louis,” the leadership role it plays in the community and for its outstanding alumni. Mention of the Cardinals’ World Series win brought another round of applause, and the new president said he was looking forward to spending a lot of time in St. Louis.

Wolfe and his wife Molly currently live outside of Boston with their 16-year-old twins who are high school juniors.