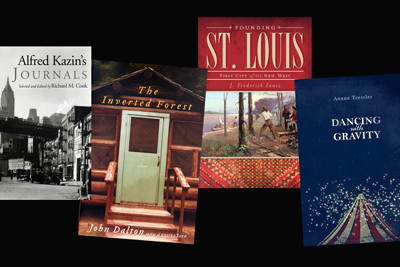 Four authors with UMSL ties wrote books that were included in the St. Louis Post-Dispatch's annual roundup of favorite books, including (from left) "Alfred Kazin's Journals" by Richard Cook, chair of the Department of English; "The Inverted Forest" by John Dalton, director of the MFA in Creative Writing program; "Founding St. Louis" by J. Frederick Fausz, associate professor of history; and "Dancing With Gravity" by English alumna Anene Tressler.

The Post-Dispatch included “The Inverted Forest” by John Dalton, director of the MFA in Creative Writing program, in its fiction category alongside “The Outlaw Album” by Daniel Woodrell and “11/22/63” by Stephen King. Dalton’s novel, his second, is split in two halves. The first focuses on a fortnight at fictional Kinderman Forest Camp in the Ozarks of Missouri where inexperienced counselors struggle to manage a group of mentally disabled campers. The second half deals with the fallout from a disastrous camp encounter.

Fresh off its inclusion in the New York Times 2011 Holiday Gift Guide, “Alfred Kazin’s Journals” edited by Richard M. Cook, chair of the Department of English, was included in the nonfiction category of the Post-Dispatch’s best books list. The book came together after the completion of Cook’s book “Alfred Kazin: A Biography” in which the author heavily relied on the prominent literary critic’s journals. Cook said the journals contain “much of [Kazin’s] best writing.”

And “Founding St. Louis, First City of the New West” by J. Frederick Fausz, associate professor of history, and “Dancing With Gravity” by alumna Anene Tressler-Hauschultz, MA English 1996, received mentions as standout books with a “local or regional flavor.”

“Founding St. Louis” delves into the 250-year-old mystery of why and how French St. Louis was founded. Fausz’s book offers new insight into the roles people such as Pierre Laclede, the early Chouteaus, Saint Ange de Bellerive and the Osage Indians had in the founding of the Gateway City.

Tressler-Hauschultz, who writes under the name Anene Tressler, made her debut as a novelist with “Dancing with Gravity.” The book is set in St. Louis and focuses on the lonely character Father Sam Whiting as he grapples with numerous life obstacles. That’s before he receives the assignment of minister to a small Latin American circus bequeathed to an order of aging nuns.

The original St. Louis Post-Dispatch article has appeared in publications throughout the United States, including the Sacramento (Calif.) Bee and The News Tribune (Tacoma, Wash.).

Visit blogs.umsl.edu/news/tag/2011-best-book to read UMSL Daily coverage of each of the four UMSL-affiliated books that made the St. Louis Post-Dispatch’s 2011 roundup of favorite books.