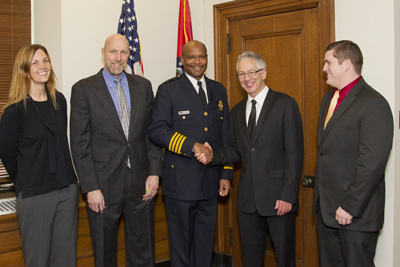 St. Louis Metropolitan Police Chief Dan Isom delivered his crime report to the Board of Police Commissioners Wednesday reporting that crime had dropped 40 percent over the last five years. He followed the report with a recommendation for the city and his department to partner with the University of Missouri–St. Louis’ Department of Criminology and Criminal Justice to help drop those numbers even further.

Richard Rosenfeld, Curators’ Professor of Criminology and Criminal Justice, told the crowded hearing room at police headquarters that the St. Louis Public Safety Partnership, will focus on “research projects to expand the department’s capacity to reduce crime and coordinate across the entire criminal justice system,” he said. “We will identify best practices of metropolitan police departments and work with other agencies to reduce the recidivism rate.”

Rosenfeld will begin work on the project during the 2012-2013 academic year. The partnership also calls for a graduate research assistant to work on the project. UMSL criminologists will be stationed in St. Louis Police Headquarters and work directly with police officers to help implement and evaluate crime reduction initiatives.

UMSL Chancellor Tom George said the university was committed to improving the greater St. Louis community through its innovative programs. He noted the university’s national ranking among the top five criminology programs.

“We are looking forward to working with the city and with Chief Isom, one of many UMSL alumni in the department,” George said.

The recommendations and principles for the partnership grew out of St. Louis participation in IBM’s 2011 Smarter Cities Challenge.