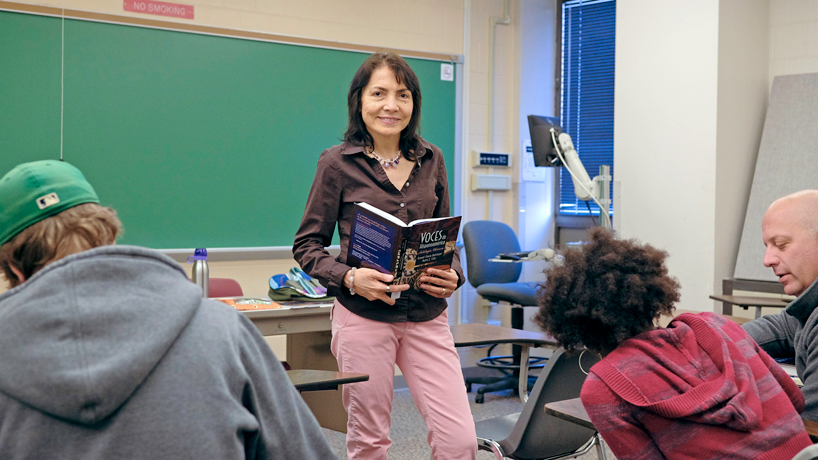 Legends, dreams, dance and real-life characters occupy the pages of a new book from University of Missouri–St. Louis Associate Teaching Professor María T. Balogh. So do a few “Dos and Don’ts for Growing Up in Macholand.”

In her essay so titled, Balogh provides tongue-in-cheek tips for playing “a successful part” in such a society. The satirical piece is tucked alongside wide-ranging stories and poems in her second collection, “Cumbia Soul,” released in March by Cool Way Press.

Balogh published her first volume of poetry two years ago – in Spanish, her native tongue – but took a different approach with her second book. Composed in English, “Cumbia Soul” also differs in that it branches out into multiple genres.

UMSL Daily caught up with the UMSL alumna, originally from Barranquilla, Colombia, to discuss her new collection, her writing and her teaching role in the Department of Anthropology, Sociology and Languages.

Where did the title of this second book – “Cumbia Soul” – come from?

It was titled after the first poem in the collection, only it is an abbreviated version of it. Somehow, just saying “Cumbia Soul” rather than “I Am Cumbia Soul” seems more impacting. Cumbia is the most representative of Colombian Caribbean folklore. It is a tri-ethnic (African, Native South American and Spanish) rhythm that brings together elements of these races in its music, dance steps and garments, respectively. I am a daughter of such combination as well, and so I claim my Cumbia Soul.

A few of the poems that especially stand out to me in this collection are “Dancing Headstart,” “Newspaperman” and “The Poor Eternal.” How do you go about bringing vivid characters to life within these and other pieces?

“Dancing Headstart” was inspired by my late maternal grandmother. In fact, it was after her passing that I started writing at all. She has continued to be an influence on my writing since my first attempt at writing a facsimile of her life story, which morphed into a fictional story. When I was informed of her death – she died in Barranquilla, and I was here in the U.S. – the tune that she had sung to me as a baby is what kept playing in my head as a form of mourning. Years later, the poem came to me.

“Newspaperman” is based on a scene I witness almost every day driving to school. This is just an example of characters from real life that I observe and find interesting or unique to develop into a poem. Like him, there are many all through my poetry.

Beyond the switch from Spanish to English, how does “Cumbia Soul” compare to your first collection, “Bailar Caribeño”?

The main difference between the two is the mix in the content of the second. That is to say, “Cumbia Soul” has poetry, fiction and an essay whereas “Bailar Caribeño” is a collection of poetry alone. The themes of the poems are similar, faithful to the prevalent themes of my poetry. Quite a few of them are English versions of the Spanish ones in my first book that have been revised more extensively.

In the rousing title poem you speak of “wild Caribes” and “timid Tubara” and “African slaves” and “Spanish Criollos” all playing a part in a multifaceted, dance-like identity. Are there ways in which this sets the tone for the rest of your book?

In a way yes; it establishes the identifiers of the poetic voice and the setting for the following tales of cross-cultural, multiethnic identities that emerge throughout my works.

As a bilingual writer and teacher here at UMSL, what sorts of opportunities and challenges arise in the classroom?

The opportunities as a writer are of course the appeal to both worlds. There’s something to be said for being an “exotic” voice in certain settings. As a teacher at UMSL, I am not unique since my whole department is composed of bilingual, bicultural educators.

I have perhaps the advantage that I earned my MFA in creative writing here, so I have the opportunity to get involved with students from outside the department. For example, right now there are two students in the MFA program who are bilingual writers and with whom I have had the pleasure to work and continue to do so.

Any advice for fellow and aspiring poets?

Write! And then write some more! It is easier said than done, I know from personal experience, but you have to prioritize your writing as much as life permits.