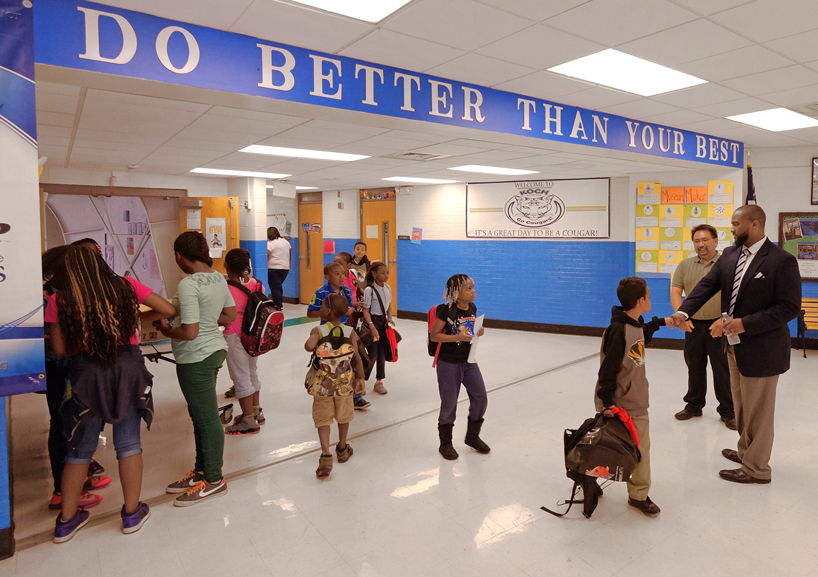 UMSL alumnus Howard Fields III (far right), principal of Koch Elementary School in the Riverview Gardens School District, says goodbye to students as they are dismissed for the summer. (Photo by August Jennewein)

Howard Fields III was so eager to start the 2014-15 school year as principal of Koch Elementary School in the Riverview Gardens School District. Fields had attended Koch himself as a student.

“I remember being so excited to be the principal of the school that I had first attended. Coming back to Koch Elementary School was like coming home,” he said. “School was to start on the Monday, and on that Saturday I received a call about the shooting. With reflection of this event, I realized I no longer was only a principal of an elementary school. I now had been placed into an opportunity to serve my school community as a leader of change.” 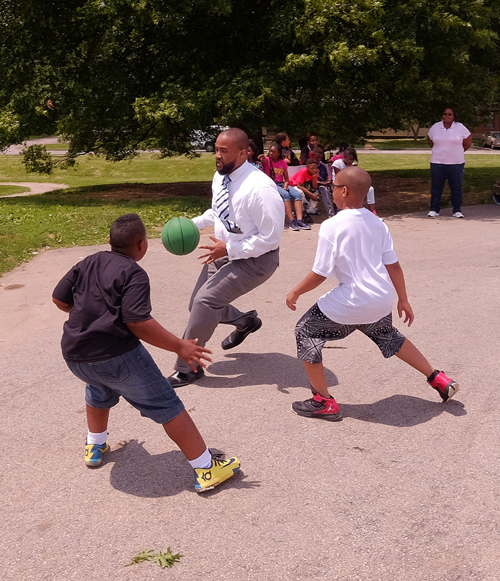 UMSL alumnus Howard Fields III, principal of Koch Elementary School in the Riverview Gardens School District, plays a friendly game of basketball with a few of his students during recess. (Photo by August Jennewein)

The Aug. 9 shooting of Michael Brown occurred on Canfield Drive in Ferguson, Mo., resulting in months of unrest.

“What people might not know is that at the time, there was only one way in and one way out from the school, and that was Canfield Drive,” said Fields who earned his bachelor’s and master’s degrees in education from the University of Missouri–St. Louis. “Our school doors were open for our community, even through the unrest. Prior to the first day of school with students, our team huddled up in the library and I shared that we are the individuals that God placed here to do this work. Our students need us, and if it has nothing to do with learning and teaching, we will not entertain it. And we didn’t.”

Fields grew up across the street from Koch Elementary, attending Riverview Gardens schools most of his life. He went on to attend St. Louis Community College–Florissant Valley before transferring to UMSL.

“UMSL is an amazing school,” he said. “The professors are outstanding and the programs are top-notch. Also, the university does a wonderful job at allowing you to network and collaborate with those not only in your field, but outside as well.”

Fields began his teaching career in the Jennings School District. From there, he moved on to Riverview Gardens and spent several years teaching before becoming an administrator. Last year was his first year as a school principal.

“I feel like our school and district collaborative teams were able to come in every day and be strong for our students, families and staff,” he said.

When asked what contributed to being consistently strong for the students and staff, Fields credited his experience dealing with crisis, the resources and support the district provided and most importantly, his faith.

“We faced a lot of challenges, but it galvanized our community and made us stronger,” he said.

The QuikTrip on West Florissant Avenue that was destroyed after Brown’s death had served as the only grocery store for many of the families in the area.

“As a result of our philosophy to meet the needs of the whole child, we created a food pantry in the school,” Fields said. “We wanted the school to be the central place for our families. For some, school was the only place they felt safe.”

And through all the challenges, Fields made a difference in his first year as principal. His efforts not only helped families deal with the unrest but also improved test scores in a struggling district.

As Fields and the staff at Koch prepare for this upcoming school year, which will begin a day after the one-year anniversary of Brown’s death, he said he anticipates even more positive change in the coming year.

“It’s our 50th anniversary and we are looking forward to celebrating 50 years of Koch Elementary,” he said. “When we started in 1965, Koch was recognized as the National School of the Year for its innovative design and stimulating learning environment. We currently are seeking to regain accreditation status, in addition to finding ways to serve our students as a nationally recognized school.”

The food pantry at Koch will continue throughout the school year. Donations can be dropped off at the school at 1910 Exuma Drive. Contact Koch Elementary School at 314-868-3029 for more information.